Sainz: A very good day for me and the team 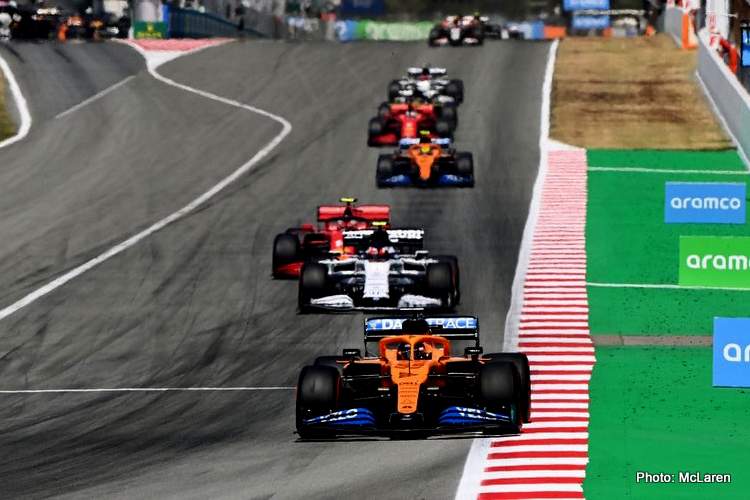 Carlos Sainz was a transformed man after taking delivery of a new chassis for the Spanish Grand Prix weekend, the Spaniard repaid his McLaren team with one of his best drives to finish sixth.

At Circuit de Barcelona-Catalunya this weekend, McLaren did not have the edge on the midfield pack that their drivers enjoyed at previous races this season. Nevertheless, Sainz qualified seventh and teammate Lando Norris ninth in the sister car. Neither works Renault made it into the top ten…

The packed midfield is a merciless place to be, and at the end of an afternoon toiling in the heart of it Sainz did well to come away with sixth place.

“A very good day for me and the team,” said Sainz in the team report. “To finally get a good result after the issues of the previous four races feels great and I honestly think we deserve it.

“We put in a very good fight with the Racing Points and defending from the Red Bull after the pit-stop was key. It’s a pity that I got lapped by Max [Verstappen] at the end of the race and lost a couple of seconds, because Checo [Perez] had the time penalty and I think we could’ve finished in front of him.

“But anyway, the mechanics did a good job today, with all four pit-stops under three seconds, and we managed to get both cars in the points. This has been a confidence-building weekend for the team and hopefully a turning point in my season.”

In contrast, Norris was not comfortable all weekend, and was well beaten by the Spaniard; the young Englishman acknowledged, “A tough race. We had really good pace in the car but, as usual in Spain, it was very difficult to overtake.

“It’s a shame – because the car felt good. It came alive a lot towards the end. It would’ve been nice to use a little bit more but tenth was, I think, the best we could’ve done today, so I’m happy to be in the points.”

Team principal Andreas Seidl was happy,  “Finishing P6 and P10 today is a great result at a race we expected to be very challenging.  Carlos put in a great drive and maximised everything we had to beat one of the Red Bulls. Lando was unlucky to lose a couple of places at the start, but after that drove with really good pace.

“Now, we’ll take the time to recharge, as it isn’t long until we head out to Spa and start the next triple-header,” added the McLaren boss, whose team lies fourth in the constructors’ championship standings.