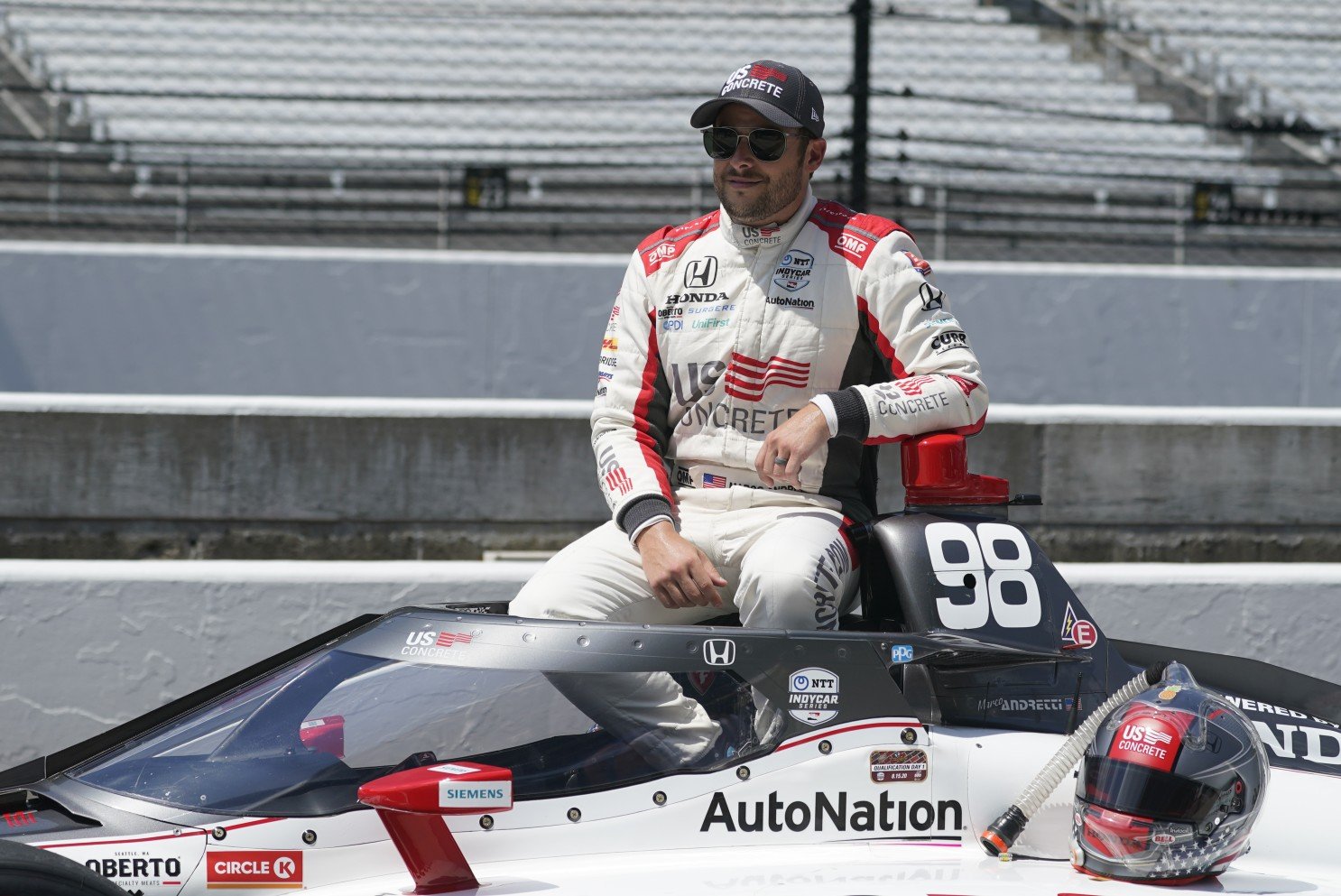 Marco Andretti led a Honda rout on the first day of Indianapolis 500 qualifying – a session dominated by Andretti Autosport and Honda as Team Penske was shut out of pole contention.

Andretti posted a four-lap average of 231.351 mph to top the speed chart Saturday ahead of teammates Ryan Hunter-Reay, Alexander Rossi and James Hinchcliffe. The fastest nine advance to a Sunday shootout that determines the first three rows for the Indy 500.

The Andretti organization grabbed four of the slots and Honda drivers took eight of nine overall.

“Honda brought it this year,” Andretti said. “I was able to just go out and do my job and, man, when it all comes together, it is just beautiful.”

Hunter-Reay was second, Rossi third and Hinchcliffe fourth in the Andretti sweep.

“To be one-through-four is pretty unheard of,” Rossi acknowledged.

Andretti Autosport tried to get all six of its cars into the top nine but Colton Herta was 10th and Zach Veach 17th after multiple attempts.

It’s also not clear that the Andretti group has the fastest car – Scott Dixon logged the fastest lap of the day at 232.356 mph in an aborted qualifying run at the buzzer. Dixon said he wasn’t trying to bump the Andretti quartet off the top when he made the late run for Chip Ganassi Racing.

“We were just checking a few things for tomorrow, we wanted to get the right balance,” Dixon said.

It was a miserable effort for Chevrolet, which only placed 19-year-old rookie Rinus Veekay from Ed Carpenter Racing in the fast nine. The Chevy camp has struggled with straight speed since the Friday horsepower boost and all four of the flagship Team Penske entries will start deep in the field.

The race was originally scheduled for its traditional Memorial Day weekend date but pushed to Aug. 23 because of the pandemic. Teams are not accustomed to these temperatures and the heat has been one of Chevy´s biggest issues.

The manufacturer thought it caught a break when Newgarden and former race winner Power both drew early qualifying slots, giving them a shot to make their runs during cooler temperatures. It should have worked, but Newgarden was only the second-fastest Chevrolet.

Power had one of the worst qualifying efforts of his Indianapolis career and will start one spot higher than his career-worst 23rd starting position in his 2008 debut.

“Probably one of my slowest cars ever. It just blows my mind,” Power said. “We ran less downforce than Josef and we were slower.”

“Now we can get back to race focus,” Power said. “We are better in race trim, for sure.”

The shootout for the pole will consist of the four Andretti drivers, Dixon, VeeKay, rookie Alex Palou of Dale Coyne Racing and Graham Rahal and Takuma Sato from Rahal Letterman Lanigan Racing.

Andretti likes his chances even as he initially worried his early speed wouldn’t hold. He’s winless in 14 previous attempts to win “The Greatest Spectacle in Racing” and the famed Andretti family has just one win in the event, a 1969 Mario Andretti victory.

“The biggest hurdle when you come to Indy is speed,” Andretti said. “We had it. But then you start to wonder – is Chevy sandbagging? Is it too good to be true? Man, Honda brought it. We´ve got the speed down. We´ve just got to execute.”

Andretti received praise from his father, Michael, the team owner.

“He blew me away,” Michael Andretti said. “That first lap was amazing. We were all shocked by it. Last two laps he was pedaling the heck out of it. He did a great job.”

“One of the challenges is trying to make all our cars equal,” Michael Andretti said. “They´re as close together as they´ve ever been. Until yesterday, I didn´t know where we were going to be. Then I thought we have a legit shot of putting six cars in the top nine.”

Fernando Alonso, in a Chevrolet, also failed to find much speed. The two-time Formula One champion is attempting to close out motorsports´ version of the Triple Crown, but his Arrow McLaren SP entry has been behind since Alonso crashed late in Thursday´s practice.