Hamilton: I was in the perfect zone that I dream of being in 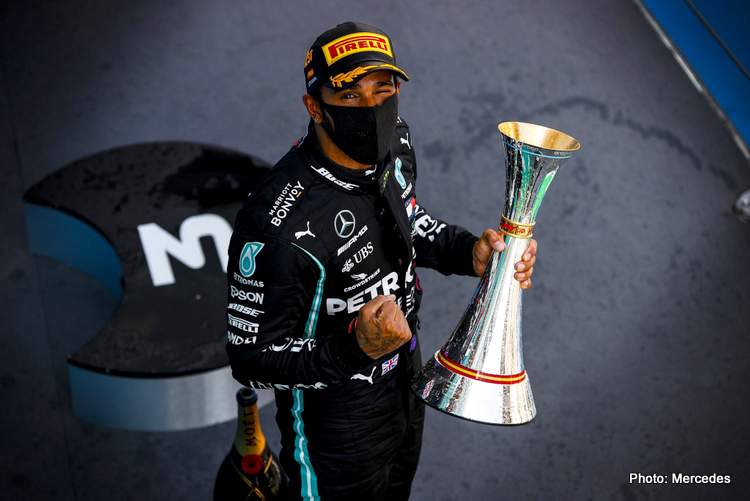 Sunday’s thrill-free Spanish Grand Prix might have had some Formula 1 fans nodding off in their armchairs but race winner Lewis Hamilton was in a dream world of his own.

The six-F1 times world champion hailed his afternoon’s work as one of his best after leading from pole position to chequered flag, and said that sometimes those races that look the most straightforward can be the more challenging.

“We all strive for perfection and it’s not always easy to deliver like that,” he told reporters in a video news conference. “In terms of how I drove and really delivering, I think today was right up there with some of the best that I’ve personally felt I’ve done. It’s super-exciting.”

Hamilton is now the winner of 88 races, just three short of Michael Schumacher’s all-time record, and a veteran of 256 starts. His 156th career appearance on the podium was an outright record.

He also has an ongoing record of 39 successive points finishes, and the result on Sunday means he now leads the championship by 37 points after six rounds.

Yet days like Sunday, when it all comes together in an almost out-of-body experience behind the wheel, are rare and to be treasured.

The late Brazilian triple champion Ayrton Senna, Hamilton’s boyhood idol, spoke of one such occurrence when he qualified for the 1988 Monaco Grand Prix after lapping “well beyond my conscious understanding”.

Hamilton said he would not describe his experience in the same way as Senna but he had felt that sense of perfect equilibrium, “There is an immense amount of pressure on all of us to perform weekend in and weekend out.

“And the goal is always to chase for perfection and be in that zone, you can be very close but still slightly out and not be quite near your perfect rhythm. But for whatever reason today, it felt like I was in the most … it was like a clear zone.

“There was a clarity I had today whilst driving that was…I’m sure I’ve had it before but I don’t even know really to get into that zone. It’s hard to say what helps you get into that place.

“I felt fantastic in the car. It was physically challenging but not making any mistakes, delivering lap upon lap. I was in the perfect zone. That’s the zone that I dream of being in.”

Hamilton said that he was gaining time even when catching traffic. When he got to the chequered flag, having lapped all but the top three and with second-placed Max Verstappen 24 seconds down the road behind him, he had no idea it was the finish and was set to carry on.

“I was like a horse with those blockers on, I was just going to keep going. I was just in a daze out there,” added Hamilton.