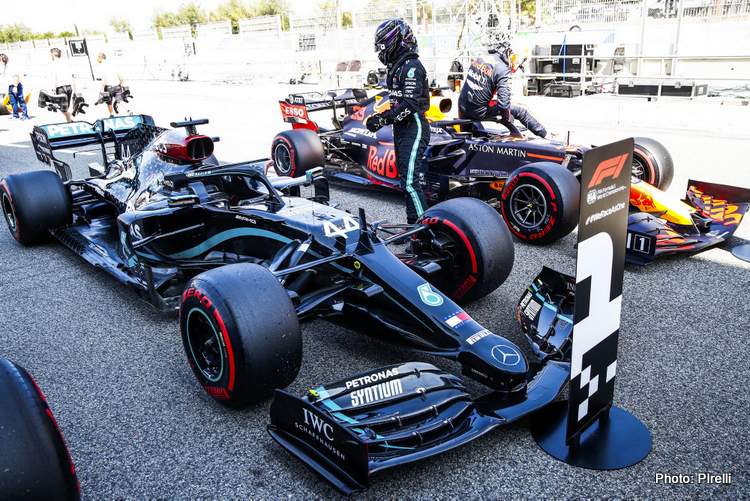 Max Verstappen has Mercedes rattled after defeating them at last weekend’s 70th Anniversary Grand Prix and despite a Mercedes one-two, in qualifying for Sunday’s Spanish Grand Prix, both Lewis Hamilton and team boss Toto Wolff are wary of Red Bull and their precocious driver.

After securing his 92nd pole position start and, with Valtteri Bottas second – heading the team’s 68th front-row lockout – Hamilton said in his post-qualifying report, “The first lap was decent, which did the job thankfully. I was here with the guys until 10pm last night just looking through the details, and seeing where we can get better for the race.

“These Red Bulls are super fast. Over a single lap, we seem to have the edge, but Red Bull’s race pace looks strong and the run down to Turn 1 is very long, so I’m expecting a tough battle.”

With Wolff also wary of the Red Bull threat that floored his team last weekend, “We know that tomorrow is what counts. It’s expected to be as hot here as it was at Silverstone last weekend, and we saw what happened there – the Red Bull was clearly the fastest in race trim.

“Looking at the long runs on Friday, they’re expected to be the benchmark tomorrow, so we need to have a clever race, manage it from the front, knowing the quickest car on track will likely be behind us with Verstappen.”

But Mercedes engineer Andrew Shovlin appears optimistic that their tyre woes may not be as a bad as at Silverstone, “We collected good data from Friday and as far as we can tell, we looked pretty similar to Max on the long runs.”

No matter how cautious they want to be. Mercedes have the upper-hand and this race is one of those that is really theirs to lose, and lose meaning not score a one-two which this car is more than capable of doing.

Merc have also not rested since the setback last Sunday, Hamilton revealed, “We changed a few things overnight, made a good step forward and I was pretty happy with my first laps in each Qualifying session.

“It’s the fastest we’ve ever been round here so the forces through your body are pretty intense. Then you’re just trying to manage the tyres on your laps.

“In the end, it was very close with Valtteri out there, he’s keeping me on my toes and every millisecond counts. Sunday is going to be challenging, as the race scenario is completely different,” added Hamilton who will be making his 150th front-row start tomorrow.