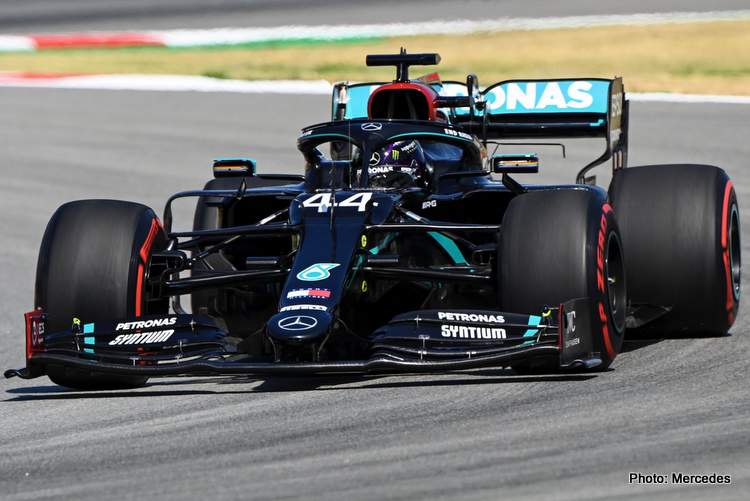 Mercedes yet again the top two slots on the timing screens at the end of the final free practice for the 2020 Spanish Grand Prix, Round 6 of the 2020 Formula 1 World Championship, at Circuit de Barcelona-Catalunya, with Lewis Hamilton a tenth and a bit faster than Valtteri Bottas.

The 60 minutes session was marred late in proceedings when Esteban Ocon crashed heavily in Turn 4, apparently avoiding the Haas of Kevin Magnussen which caused substantial damage to the Frenchman’s Renault.

The only way to describe the incident is: bizarre!

Replays show that Ocon had just been overtaken by Magnussen out of Turn 3 who then slowed abruptly in front and forced the Renault driver to avoid impact but instead he lost control and speared the barrier.

At time of writing the stewards were taking a look at the incident, as there might been a classic case of ‘brake-testing by the Danish driver or yet another brain-fade by the Frenchman.

At the sharp end Mercedes were still comfortably showing the way. Hamilton’s best effort of 1:17.222 was 0.151 of a second up on Valtteri Bottas in the other Black Arrow and half a second better than Max Verstappen in third.

His Red Bull teammate Alex Albon continued to fire blanks, his time was six tenths down on the Dutchman, and only good for ninth.

Max will be looking to take the fight to Mercedes in the race, but for qualifying it will be a tall order as the Champs have around a second advantage with the W11 in quali-mode, what happens on race day in terms of tyre management will be decisive and a different story to today.

McLaren finally showed some promise after a low-key opening day, with Ferrari-bound Carlos Sainz fourth quickest, eight tenths down on the top time, and fractionally faster than Racing Point’s Sergio Perez in fifth with teammate Lance Stroll a couple of tenths shy, in eighth.

Charles Leclerc was quickest of the Ferrari duo with the sixth-best time, also eight tenths shy of Hamilton’s benchmark lap. Sebastian Vettel was a further half a second down, 12th again in the other red car.

Red Bull reject Pierre Gasly continues to make a case for a return to partner Verstappen in the senior team as he continues to impress in the AlphaTauri, this time with seventh on the timesheets. Quicker than Albon one might add…

He appeared to swerve to avoid going into the back of Kevin Magnussen#SpanishGP 🇪🇸 #F1 pic.twitter.com/Y0WyAEe7Cx 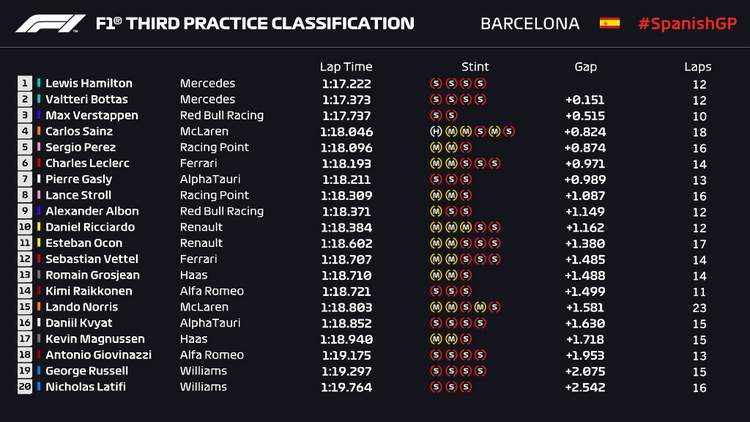