Verstappen: I would maybe have liked the softer tyres 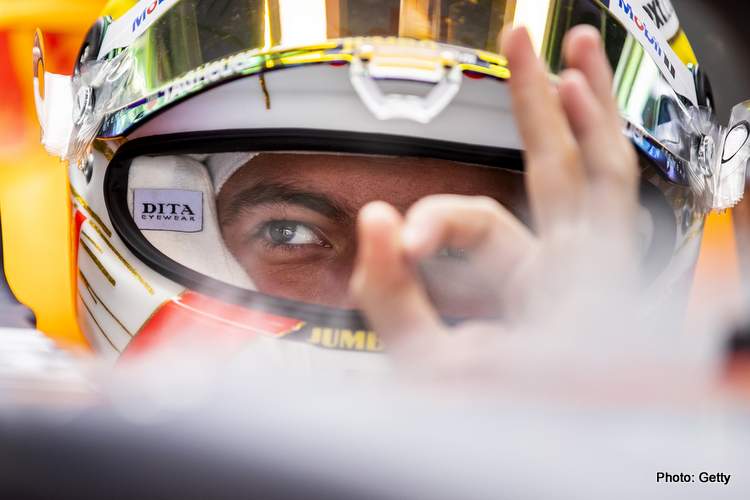 With the deficit to Mercedes tickling a full second in practice for the Spanish Grand Prix, no surprise Red Bull’s Max Verstappen is wishing for the softer rubber that so floored the World Champions at Silverstone last weekend.

Long runs suggest the Black Arrows may not be so negatively afflicted by their car’s finicky use of rubber, when the heat was on literally and figuratively, last weekend.

Today, Verstappen’s 1:17.702 was good for third fastest, best of the rest by a tenth and a bit but, notably, 0.821 of a second down on Lewis Hamilton’s benchmark lap time.

The Dutchman reported at the end of the day, “The car was performing quite well and overall it was a positive day. Over one lap we are clearly still lacking to Mercedes but on the long runs the car felt nice to drive which is of course what is important for the race.

“We are using the hardest tyre compounds here which is different to last weekend. I would maybe have liked the softer tyres,” he added with a laugh.

“That is not for us to choose, the tyres are manageable and it is pretty hot out there! I expect in Qualifying that Mercedes will still have the edge as they are very fast but who knows in the race.

“I felt quite good today so let’s see if I feel the same on Sunday when it matters,” added Max who lies second in the championship standings, 30 adrift of series leader Hamilton.

On the other side of the garage, Alex Albon was well down on his teammate, seven-tenths was the damage for the Thai driver who ended the day in 13th but suggested that he was evaluating parts as opposed to seeking outright pace.

He said, “A few things in FP2 that didn’t quite go the way we wanted them to but that’s what Friday’s are for, seeing what works and what doesn’t. We’ll have a look at the data this evening to see how we can maximise our performance tomorrow.”

The Thai driver needs to close the gap on his teammate, or at least be best of the rest as Red Bull look to fight if not for the title then at least for second place at which point why need both drivers delivering the results.