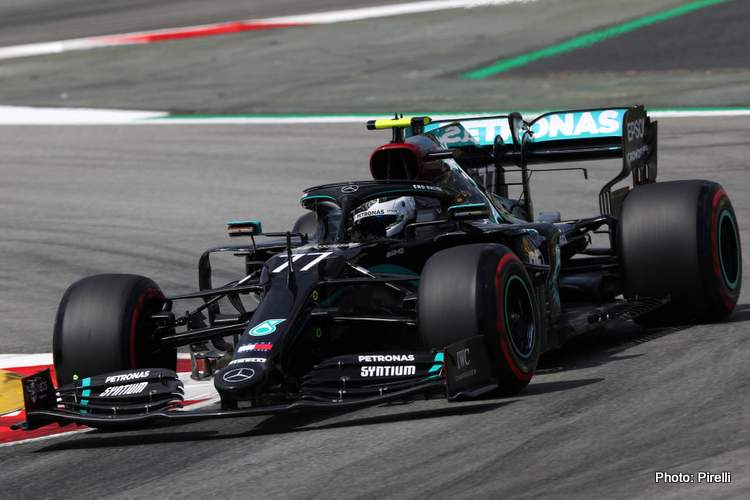 Mercedes were not shy to strut their stuff straight out the box, perhaps piqued by their defeat to Max Verstappen last weekend, Valtteri Bottas ended top of the timesheets in FP1, four-hundredths of a second up on teammate Lewis Hamilton on day one of the Spanish Grand Prix weekend.

Next best was Red Bull’s Max Verstappen suggesting the trio have unfinished business in the wake of the 70th Anniversary Grand Prix and the Battle of Silverstone which the Dutchman sensationally won. A wounded Mercedes is one to be feared trumpeted their boss Toto Wolff after the loss.

Bottas completed 15 laps on his soft tyres during his run which was clearly to assess the tyre problems last weekend, which was positive for the world champs. The afternoon session is expected to be hotter and how the W11 behaves should be more telling.

For now, the taps appear to be turned up early on perhaps to signal their intent on day one in Spain, after all Max could only come to within 0.939 of Bottas. As usual, it was a big effort by the Red Bull driver, nine-tenths better than his teammate Alex Albon in eighth.

On a positive note, at last, Ferrari appear to have found some pace around Circuit de Barcelona-Catalunya ending the 90-minutes morning session with Charles Leclerc fourth-fastest albeit 1.1 seconds down on the top time, with Sebastian Vettel in fifth – a hundredth shy of his teammate.

Coincidentally or not, the Haas looked better than it has most season with Romain Grosjean sixth at the end of the session, albeit 1.5 seconds down on the benchmark time. Kevin Magnussen was three-tenths down on his teammate, ending ninth.

It was good to see Sergio Perez back from his ordeal and immediately getting down to business with the seventh-fastest time for Racing Point, with Lance Stroll a couple of tenths down in tenth.

All four Renault powered cars were out of the top ten, with McLaren’s Carlos Sainz and Lando Norris 11th and 13th respectively, split by Esteban Ocon’s Renault – nearly two seconds off the pace, suggesting trouble or he French powder being kept dry.

Roy Nissany was on duty in place of George Russell and ended his stint slowest of all, most four seconds off the pace, three-tenths down on Nicolas Latifi in the other Williams. The Canadian 19th. 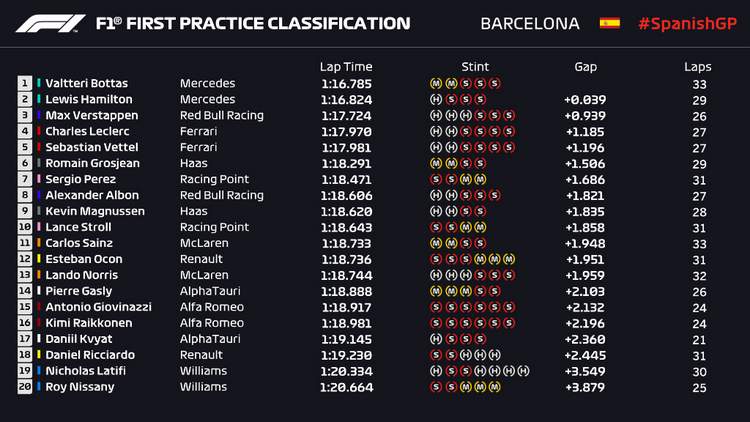