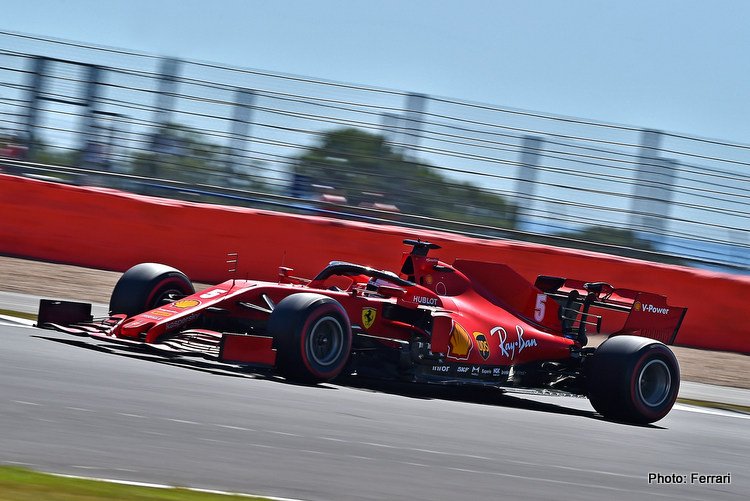 Ferrari’s Sebastian Vettel will have a new chassis for the Spanish Grand Prix, the team confirmed on Wednesday.

The announcement comes after four-time Formula 1 world champion Vettel voiced his displeasure with his car’s performance across both Silverstone races.

Finishing 10th and 12th in the back-to-back British and 70th Anniversary Grands Prix at the circuit, Vettel’s pace was a far cry from that of teammate Charles Leclerc, who finished 3rd and 4th respectively.

After the most recent race, team principal Mattia Binotto suggested a chassis swap was under consideration, and now Head of Chassis Engineering Simone Resta has confirmed that will be the case.

“There will be no particular updates on the SF1000, however Sebastian will have a new chassis,” he revealed. “Because after the Silverstone post-race analysis, we spotted a small fault caused by a heavy impact over a kerb.

“It would not have had much of an effect on performance, but it was the logical decision to take.”

Currently sitting 13th in the driver’s championship on 10 points, Vettel has undeniably struggled with the SF1000, and while reliability issues have done him no favours, his unprompted spin last Sunday seemed emblematic of a driver who is struggling for form.

Now looking to right the ship in Spain, Vettel says he is expecting a different challenge than the one he experienced at Silverstone.

“When you get to the Barcelona track you already know it will be a race where it’s the small details that make the difference.

“The teams and drivers all know this track very well and that’s why, right form the start of Friday free practice, you can work on fine tuning the car.

“This circuit is quite different to Silverstone and I am curious to find out how the car will feel here. We can expect very high temperatures and so it will be important to find a set-up that allows you to have good speed without causing excessive tyre wear.”