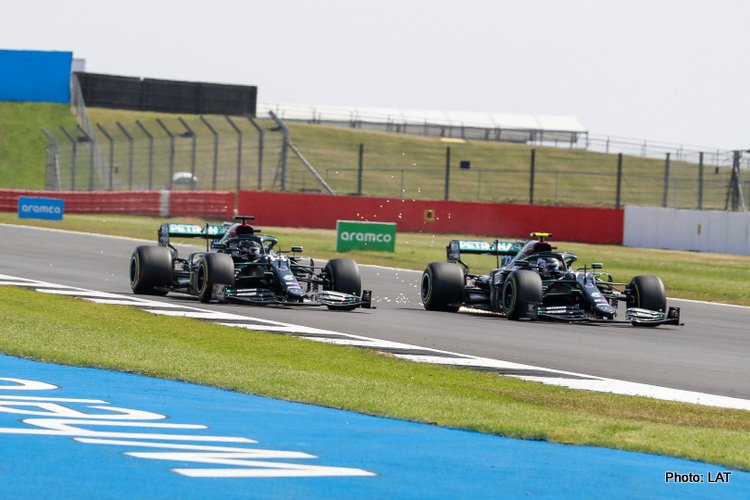 Winner of the first four races of the 2020 Formula 1 season, including the first of two races at Silverstone a week ago, the second leg at the British circuit saw Mercedes’ dominant pace desert them as the increased temperatures caused severe blistering to their tyres.

Despite starting 1-2 with Valtteri Bottas and Lewis Hamilton, Red Bull’s Max Verstappen came home with the victory, having managed a 26-lap stint on hard tyres to open the race.

Speaking about the race in his debrief on Mercedes’ YouTube channel, Shovlin conceded his car was struggling with the heat more than its rivals.

“The big issue for us on Sunday was just that our temperatures were clearly hotter than others,” he said. “We were having to slow down to control it and that was fundamentally where the big loss of pace was.

“And we were getting the centre of the tyre very hot.

“Now, the issue there is, when it gets hot, it starts sliding and it generates more heat, the pressures go up and you end up with a bit of a vicious circle, where you are losing grip and keeping it under control becomes harder and harder as you go through the stint.”

With temperatures forecasted to be high again this week in Barcelona, Shovlin said there was a significant chance of the problem repeating, although he indicated he hoped the team could use its days between the two races to make improvements.

“So, we need to be looking at solutions and if we can make good progress this week, in the next few days, try and understand exactly the nature of our problem and why we were so much worse than the others. Then I’d like to think we can get on top of it for Spain.

“Hopefully we won’t see it again, but I think Spain will be a good test of whether we have made the progress that we need to.”