Horner: Mercedes vulnerable if you put the pressure on 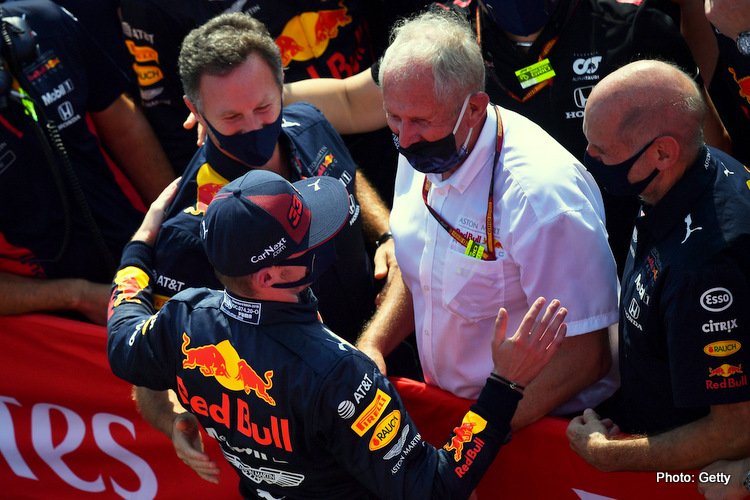 In the years since 2014, Mercedes have not had many weaknesses but one that will stand out, when looking back on this period, is that when the mighty team is put under unexpected pressure they can be left wanting and are at their most vulnerable.

Be it strategy, be it conservatism, be it whatever – pressure equals panic for the team that has wrapped up 12 titles in a dozen years at the highest level. Perhaps the greatest team the sport has ever witnessed.

But that chink in their armour was again revealed during an enthralling 70th Anniversary Grand Prix when Red Bull’s Max Verstappen took it upon himself to hunt down, torment and ultimately rattle the Black Arrows.

Records show that a race where Lewis Hamilton and Valtteri Bottas were largely expected to finish one-two with a sensational car that is easily a second quicker than the next best piece of kit on the grid.

Many questions can be asked of the Champs when the heat (literally and figuratively) was on and the way they reacted to the pressure from a fired-up Verstappen with a feisty Red Bull at his disposal.

Horner and his team have clearly realised this flaw and said as much in his post-race column, “The interesting aspect will be how hot it is going to be.

“Mercedes had a dominant car up until last Sunday, so it is now up to us to understand how we were able to unleash the RB16’s full potential last weekend and ensure we remain in the fight. It also shows that Mercedes can be vulnerable if you put the pressure on and we need to do that on a consistent basis.”

Next up is the Spanish Grand Prix at Barcelona where the European summer heat is on in full force and the next couple of months the heat will be on at the venues.

Horner added, “The races are coming thick and fast and last Sunday’s result gives us hope. When we were staring down the barrel of a one-second gap in qualifying to Mercedes, it was pretty demoralising. But I think we have had a better race car than in qualifying and Max has made great use of it.

“We tested in Barcelona back in February, which seems such a long time ago now. That data will be a certain reference but given the warmer conditions we expect at the weekend and the changes to the cars, it will all be significantly different,” added the Red Bull team boss.