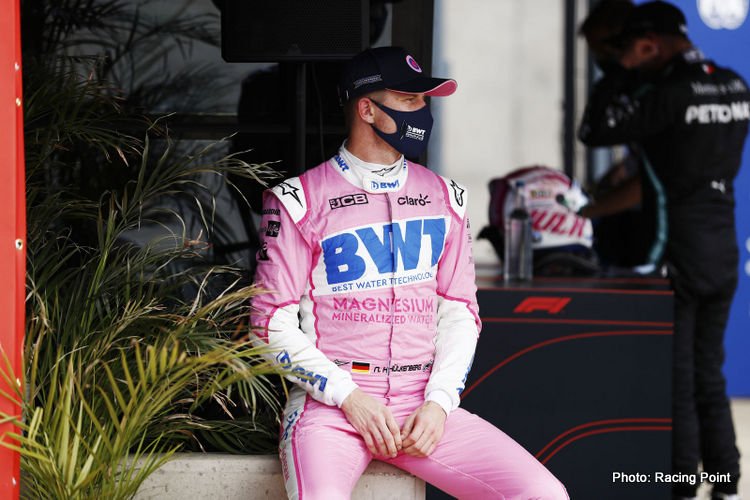 Nico Hulkenberg remains in discussions with two Formula 1 teams about a full-time return to the grid in 2021, the German has revealed.

Deputising for the coronavirus-positive Sergio Perez at the past two races, Hulkenberg has had another chance to showcase his wares after being jettisoned from Renault at the end of the 2019 season.

In his first weekend with the team at Silverstone, he qualified 13th and failed to start the race with an engine issue, but improved markedly in his second outing at the circuit, qualifying 3rd and running fifth in the race before tyre blistering relegated him to a P7 finish.

Speaking to Auto, Motor und Sport about his experience on Sunday, Hulkenberg said he was largely pleased with his performance despite the late tyre drama.

“I am happy that I was able to score points for the team,” he said. “Seventh place is not so bad, especially if you haven’t driven for so long before.

“Everything was under control in the first half of the race. I managed the tyres well. We could have set the second stop a bit later. That would have bought us more air later and put fewer laps on the cheek on the last set. But the team wanted to get me in earlier.

“I don’t know what was wrong with this second set of hard tyres. They were kind of flimsy. I was behind [Charles] Leclerc and tried to catch him. I did two or three laps more, but then the tyres overheated again.

“Then you automatically pay the price on the next lap, lose grip and slow down again. It’s like a natural limit. Then the bubbles started.”

Ahead of this weekend’s race in Barcelona, Racing Point have said they expect Perez to be back, but Hulkenberg says he is preparing as if he will be in the car again.

“I’m going on Monday in the simulator as Barcelona preparation, just in case. Then I fly to Malle and wait there until Wednesday or Thursday for Checo’s result. And depending on that I fly to Barcelona or not.”

As to the question of a full-time return, Hulkenberg said that talks are continuing to progress, although he is sceptical whether his outings with Racing Point have helped matters.

“For some time now, I’ve been talking to the two teams about where something else could go. I don’t know if anything has changed this weekend. Feels like no.

“The people there know me and are not influenced by a race weekend. There is a chance, but it will take a while.”