Vettel: You know that you’ve messed up 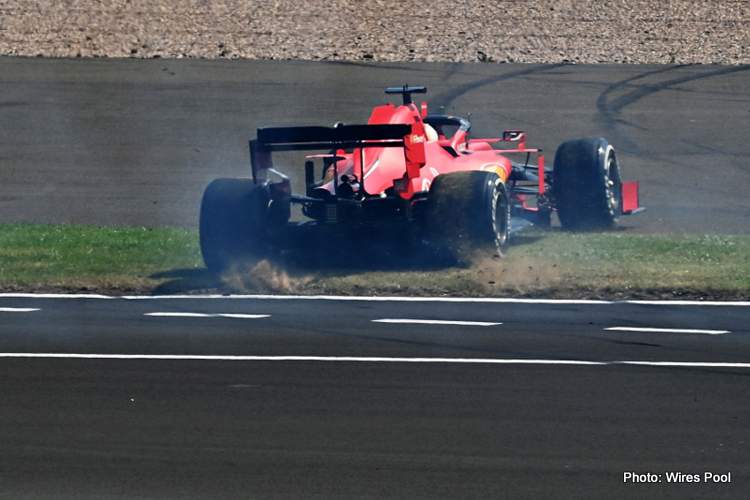 Sebastian Vettel has only himself to blame for his woes during the 70th Anniversary Grand Prix on Sunday, in which he failed to score points and revealed some startling cracks appearing on the facade of his final days at Ferrari.

Not good in the frenzy-packed midfield, where he is now plying his trade, Vettel erred on the opening lap, dropped to last and thereafter found himself toiling to finish 12th and bring an end to another troubling weekend for the German.

Ironically, despite his Turn 1 blunder, Vettel had a go at his team over the radio during the race when he pointed out for all to hear: “It is in the gap that we didn’t like. We spoke about it this morning. I’ll hang in there, but you know that you’ve messed up.”

It was as damning as it was unsubtle and suggests the divorce might become increasingly strained as Vettel’s form continues to be AWOL and suggestions he might be getting inferior kit already surfacing in the paddock.

After the race he reported, “Today I tried my best. Unfortunately I had a spin in turn 1 and I’m not sure what happened there. I thought I got hit, but actually it was a kerb, and I suddenly lost the car.”

But then the dart directed at his team, “However, I also feel we could have done a better job on the strategy. After my first stop, I was in traffic and for this reason, we had to bring forward the second stop.

“In the end, I had to drive on the Medium tyres for 20 laps, which I feel was not the best choice we could have made today,” added the German, and be sure the “we” should actually read “they” as in his soon to be former team.

He explained to reporters after the race, “We spoke this morning that there’s no point pitting knowing that we will run into traffic and that’s exactly what we did. We went also onto a hard tyre that we then only had on for roughly 10 laps, probably not even that. So it didn’t make any sense.

“Why would you put the hard for 10 laps and then put the medium for 20 laps? I was running out of tyres towards the end. We spoke about exactly that but I guess not the best work we all could have done today.”

Whatever the case, with Max Verstappen using the Mediums to such good avail at the start, resulting in the race win, Vettel will rue the missed opportunity as he too was on the winning tyre combo but after a couple of hundred meters it mattered no more as he had eliminated himself from contention.

Asked whether he felt there were differences between his car and that of Charles Leclerc, Seb was not shy to fire up the conspiracy theories, “I don’t know. I guess something’s there that I’m missing, I’m not sure what it is, but nevertheless I try and get out of bed and do the best that I can.

In contrast, Leclerc in the sister car ticked all the boxes and brought the SF1000 brick home in fourth place and, in truth, his teammate could not get a sniff of him all weekend.

Furthermore, Vettel’s latest incident simply adds to his ever-growing list of errors, inexplicable for a driver of his status and experience – this latest unforced error hard to ignore for anyone who might be thinking of providing the 33-year-old with a lifeline since the Reds made him surplus to requirements.

Ferrari soaked up the criticism by ignoring it initially, but Mattia Binotto fired his defensive salvo in the team’s post-race debrief, “Given the positions of our drivers at the end of the first lap – Charles tenth and Sebastian last [ouch].

“We tried to make the best strategy choices to bring home as many points as possible for the team. After that, we made up six places with Charles and eight with Sebastian, so I don’t think we could have done better in a race in which there were hardly any retirements or safety car periods.

“Charles finished in the same excellent position as last weekend and Sebastian’s position was the result of his first lap incident last [another ouch],” added the Ferrari team boss.