Bottas: As a team we were sleeping at some point 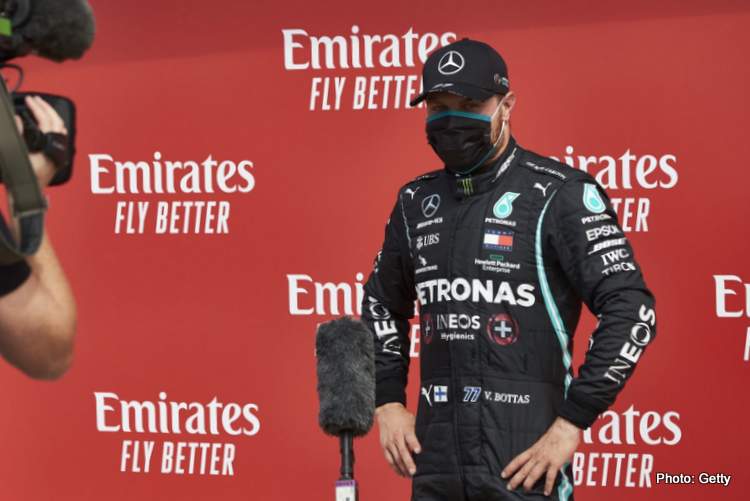 Mercedes could not make use of their one-second advantage to their rivals at the 70th Anniversary Grand Prix on Sunday, as Red Bull’s Max Verstappen who robbed the Black Arrows of what appeared to be a sure victory.

Starting from pole Valtteri Bottas got the march on teammate Lewis Hamilton in P2 as the pair set about into the distance with only Max Verstappen hanging on.

After a dozen or so laps it became apparent that the Mercedes W11 was chewing through its tyres and within a few laps Verstappen (who started on the Mediums while around him his rivals were on the Soft) sniffed victory and sensed Mercedes were inadvertently contriving to lose the race.

By the time the dust had settled, Valtteri was left standing on the third step of the podium, not the top one, when a win was expected. Instead, he finished behind winner Verstappen and his teammate Hamilton whose bolder strategy gave him pace at the end to finish second when the Finn had run out of ammo.

Downbeat and in a rare instance of criticising his own team, Bottas said during the post-qualifying interviews, “As a team, we were sleeping at some point when Max managed to get ahead of us and my strategy was far, far from ideal. Lots to learn from today, I think.

“Very frustrating. It’s never great to start from pole and finish P3. I think we were pretty much on the back-foot from the moment I lost track position to Max.

We potentially could have gone longer in the second stint, the way Lewis did, to be able to push more towards the end of the race on fresher tyres. I tried to keep up with Max, but as soon as I started to push in the final stint the tyres just fell apart.

“We really struggled with the blistering today; as soon as you have blisters, you lose the grip and the performance, and it becomes very tough. It seems like the other teams, particularly Red Bull, didn’t have the same problem, so we’ll have to look into that and try and get to the bottom of it.

“There’s a lot to learn for us today, but as always we’ll move on and try to come back stronger,” added Bottas who now trails Hamilton by 40-points in the title race, ten more than he did on Sunday morning.