Verstappen: We don’t have the qualifying mode that Mercedes do 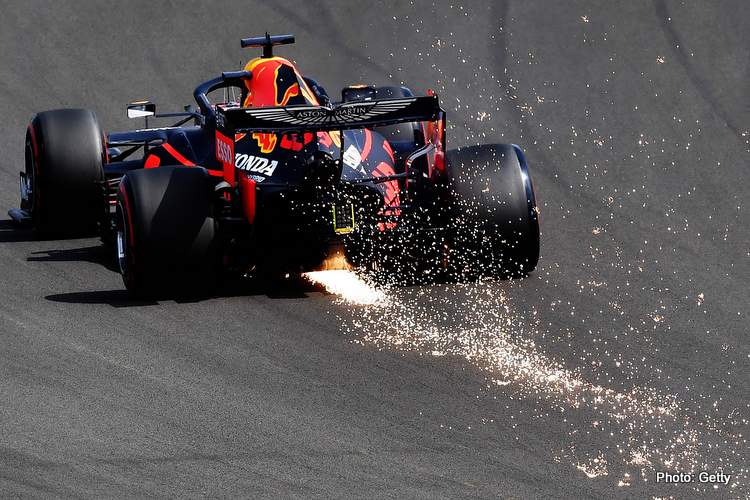 Max Verstappen was left to lament the lack of horses in his #33 Honda-powered Red Bull which resulted in fourth place in qualifying for the 70th Anniversary Grand Prix at Silverstone.

Mercedes were again untouchable with Valtteri Bottas edging out Lewis Hamilton in the shootout for pole position. The Black Arrows are on another planet and their customer car in the hands of Nico Hulkenberg proved handy too.

Consequently, Max was fourth fastest albeit a full second down on Bottas and explained why in his post-qualy report, “We just don’t have the qualifying mode that Mercedes do. I hope the start is going to be clean and from there onwards I think we can still have a good race.

“Starting P4 is of course not perfect but the cars in front did a good job and Q3 was pretty tricky as the wind switched around and unbalanced us a bit.

“I felt strongly about using the hard tyre for the race start as we are already on softer compounds this weekend and the medium was last week’s soft, which wasn’t great in the race and with warmer temperatures this weekend I like this option.

“It was just a matter of making it through to Q3 on the hard tyre which we just about did. I don’t know what starting on the hard tyre tomorrow will give us and it depends on the first lap and Safety Cars but hopefully, it will be positive and it is at least different to everyone else in the top ten.

“It is still a long race tomorrow and our race pace is normally more competitive, and the goal is still to be on the podium. I am also happy for Nico that he has an opportunity to show his pace,” he added with reference to Hulkenberg’s third place for Racing Point.

Alex Albon in the sister car continues to be glaringly overshadowed by his teammate, this time the Thai driver was over six tenths down on the Dutchman and appears somewhat lost at sea, “I was feeling comfortable and it was looking good up until the final run in Q3 when we went from mediums to softs and I experienced a very different car balance.

“I felt good with the car and I was optimistic going into the last lap but it just completely changed, maybe also with the wind, and I’m obviously not happy with P9.

“Some teams are able to get the soft tyre to work and we struggled with it today, so we need to understand why. I know there’s also time within myself and that’s just about getting more comfortable and consistent with the car.

“Tomorrow will be interesting as there are different strategy options available. Last weekend we showed we have a good race car and the pace to move forward no matter what, so the plan tomorrow is to get the most out of our race pace, make-up positions and get the job done.”

Meanwhile, Pierre Gasy trounced Daniil Kvyat, the Frenchman who was not shy to hide his delight in the team report, “That was an amazing Saturday and I’m very happy about my Qualifying result!”

The signal has been sent to his employers who must be running out of patience with Albon’s lack of progress relative to Verstappen, while the Frenchman he demoted is looking increasingly impressive in the AlphaTauri and is making Kvyat look ordinary.

Honda may have been lacking in qualy mode (do they even have one?) but remain upbeat with tech boss Toyoharu Tanabe declaring, we know that all four cars have good enough pace to move up the order tomorrow when we will do all we can to extract maximum performance from our PU.”