Norris: The car’s not hooked up 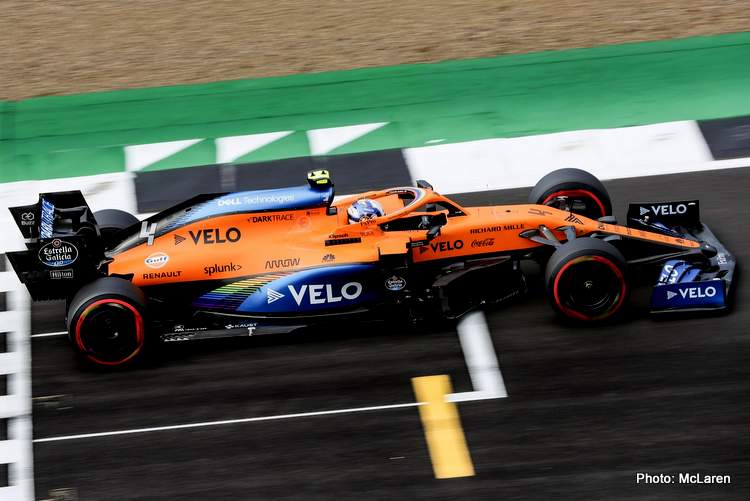 McLaren young star Lando Norris continues to impress with his performances alongside Ferrari bound Carlos Sainz, this time in qualifying for the 70th Anniversary Grand Prix where the Spaniard failed to make it beyond Q2 while the Briton ended the day tenth.

Norris has owned Sainz all weekend at Silverstone thus far, quicker in every practice session and in qualifying the former had the couple of tenths needed to make the difference between the Q2 chop and progresing to Q3. Sainz, in 12th, will line-up behind his teammate on the grid.

Norris summed up his afternoon, “Not a bad qualifying, to be honest. P10 maybe doesn’t sound great in terms of position, but I think this weekend we’re realistically a bit more in-position and we knew this wind wouldn’t play in our favour.

“I think the Renaults, with Daniel, were considerably quicker, showing that their car is very competitive, and both Racing Points are doing a good job of extracting performance – Albon too. I think we’re where we expected to be, so I’m not really disappointed.

“I don’t think there was much more in the car. There was a little, I think mainly because of the wind changing in the second run or into Q3, as I struggled a bit more with the car than in Q2.

“It wasn’t easy – the car’s not hooked up. It’s trickier to drive this weekend because of the wind conditions, but still not a bad position to be in for tomorrow,” added the 20-year-old.

Sainz on the other hand, seems to have lost the higher ground at McLaren since it was confirmed he will replace Sebastian Vettel at Ferrari. A glance over at the fortunes of his future team is hardly going to instil confidence.

Sainz explained in his review, “Obviously not very happy with today. Seeing our rivals make a step forward into this weekend puts us in a trickier position when trying to get into Q3. We committed to a plan of going through with a Medium and unfortunately, we didn’t manage to make the cut.

“We have a bit of a problem in my car this weekend and we had to change the bodywork before quali to help with the cooling. A less tight bodywork here in Silverstone costs us some lap-time due to the increased drag, so yeah, a bit frustrated by that, but at the same time I still think we can fight tomorrow and we’ll definitely do our best to get back into the points,” he added confidently.

McLaren team principal Andreas Seidl pointed out in their Saturday reprt, “It’s the first time this year we’ve not had both cars in Q3. We knew that in today’s conditions we would struggle with pace and, in addition to this, some of our competitors either made a step forward this weekend or were able to use the full potential of their cars today. With such a tight midfield, it’s not a surprise to be fighting for Q3.

“There are still opportunities to move forward in the race tomorrow. We’re expecting very high ambient temperatures and strong, gusting winds. Together with the softer tyres being used this weekend, we expect an interesting grand prix. We will prepare as best as we can and try to make up some positions in the race.”