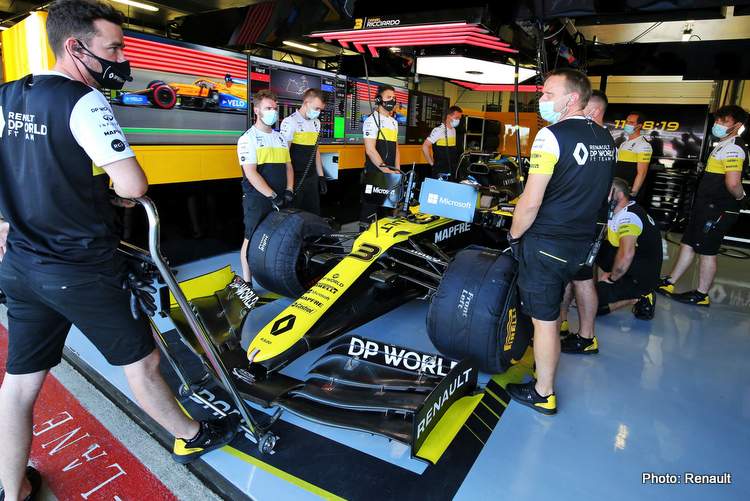 The reality of Mercedes’ utter dominant car takes them out of the equation, but behind them with the demise of Ferrari and a below-par Red Bull, Renault may well be the surprise package this weekend with Daniel Ricciardo clearly fired up for the 70th Anniversary Grand Prix.

The Australian ended the day Best of the Rest, third on the timing screens after a mega lap in FP2 suggested even more improvements for the French team but also an ‘on fire’ Ricciardo who ended the session half a second faster than teammate Esteban Ocon in the sister car.

Apart from the two Black Arrows way upfront, behind them it is very tight – less than a second separating Ricciardo and George Russell down in 16th.

Nevertheless, Chief Race Engineer Ciaron Pilbeam played down the performance, “Daniel’s Soft tyre run in the afternoon was quite quick, but it’s only Friday, so we’re not getting too excited!

“We’ve had quite a good day with both cars getting through their programs smoothly. Our focus in the morning was on various aero assessments and we spent some time in both sessions understanding the Soft tyre in particular, which is a step softer this week.

We’re pretty happy with our work today. Everybody ran the same tyres in the morning session, but we have done something different with our tyres compared to most others in the afternoon, and it will be interesting to see how the consequences of that shake out through the rest of the weekend.

“Both drivers are happy with their car and as normal for a Friday, we have some work to do to find a little bit extra for tomorrow,” added Pilbeam.

Ricciardo was clearly the happier of the two drivers, “We had a good run on the Hard and then on the Soft as well. On that Soft run, we still missed out a bit in some areas, so there’s definitely more there.

“Our long runs also looked decent, so that’s a good base for Sunday. I think the wind direction is changing tomorrow, so we’ll see what happens there. Overall, it’s been a good day for us.”

Ocon, tenth at the end of FP2, acknowledged, “Daniel’s run on the Soft was certainly fast, which is good as we both tested different things and it’ll be interesting to see the comparisons. Hopefully we can repeat that tomorrow. We had a few problems here and there, but nothing too crazy and the car generally felt reasonable all day.”

Notably, the other two Renault powered McLaren’s of Lando Norris and Carlos Sainz were also in the top ten, the pair ending the day ninth and tenth on the timing screens.