Vettel: I’ve got lots of possibilities 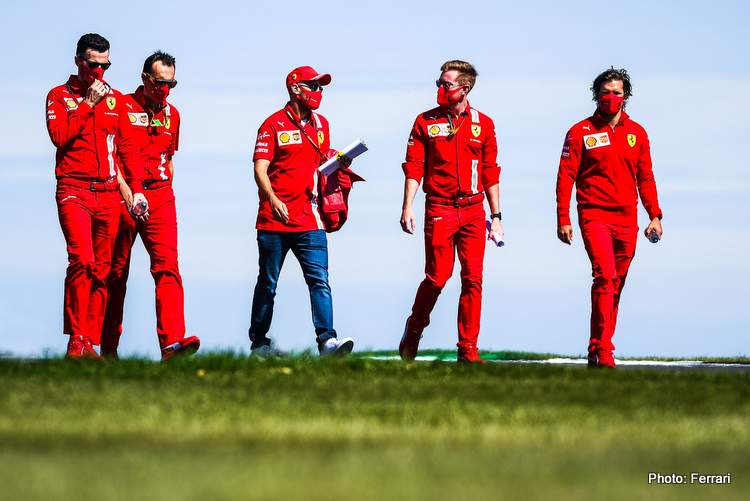 Formula 1 photographer Mark Sutton had reported seeing the German getting into the passenger seat of Szafnauer’s Ferrari after the race at Silverstone, but was unable to take pictures.

“It is correct. We were heading to the fuel station,” Vettel, who is leaving Ferrari at the end of the year, told reporters ahead of the 70th Anniversary Grand Prix at Silverstone.

“After the fuel station he was going home and I continued going somewhere else. It’s a nice car. A Ferrari Pista and I remember years ago he was talking about that car and now he obviously got one.

“We were wearing masks… I find it a bit awkward nowadays that people make a fuss out of everything. I don’t see the news in that.”

Asked whether it was fair to assume that racing for Aston Martin, Racing Point’s new name from 2021, was still very much a possibility, Vettel swerved the question.

“I’ve got lots of possibilities,” said the 33-year-old, who won his titles with Red Bull in 2010-13. “Maybe not so many in Formula 1, as you can do the maths and see which seats are taken.

“I think the most important is that I’m happy with my choice and time will tell what the choice is. I’m not too stressed about it.”

Vettel was also seen giving Racing Point owner Lawrence Stroll an elbow greeting but he played down the significance of that, “I was also giving an elbow greeting to (Mercedes boss) Toto (Wolff) and to (Red Bull principal) Christian (Horner) and other people in the paddock.”

Teammate Charles Leclerc, sitting alongside, reminded him there was still a seat at Mercedes — that of six-times world champion Lewis Hamilton who is out of contract at the end of the year but looks sure to stay.

Mercedes-powered Racing Point are Vettel’s best bet but both their drivers have long-term contracts. One is Lance Stroll, the owner’s son, while the other is experienced Mexican Sergio Perez who brings substantial sponsorship.

Perez is ahead of Stroll in the championship, despite missing the last race after testing positive for the new coronavirus.