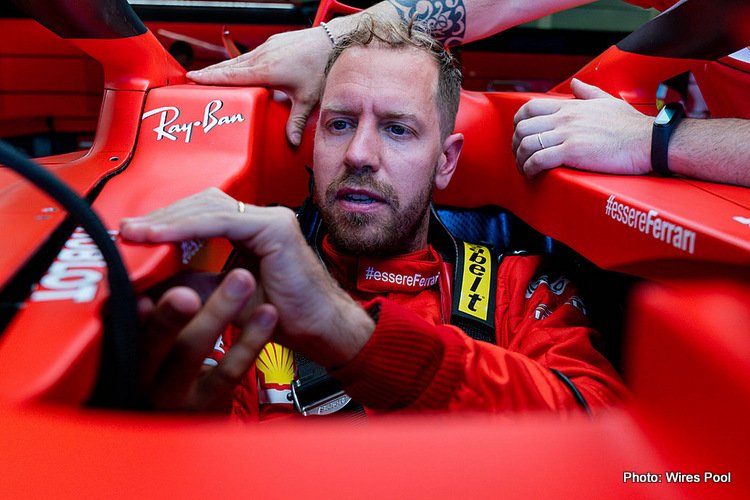 According to a growing number of media sources, Sebastian Vettel will be driving for Aston Martin next year alongside Lance Stroll, with the team set to ditch Sergio Perez for the next chapter of their colourful existence.

In terms of marketability, it is clear that Seb has always been the clear favourite for the seat, especially if you consider this storyline: four-time F1 world champion can’t drive those Red things, so he has ditched them for Aston Martin instead and is far happier – visual: Seb changing from red car to green car and driving into the distance with a big grin on his face…

Checo simply does not pack that type of global marketing punch that a well-orchestrated Vettel defection story has, nor the brand-building clout that four F1 World titles bring to the table.

Adding fuel to this is the fact that ace photographer Mark Sutton spotted Otmar Szafnauer and Seb sharing a Ferrari in-and-out of Silverstone last weekend.

Which, in turn, gives credence to suggestions in the sparse paddock that the deal is already done and was, in fact, going to be announced at Silverstone – the home of Racing Point aka Aston Martin – last weekend.

However, they pulled the plug on the plans when Checo tested positive for COVID-19.

One assumes that the luckless Mexican will be ousted when the time comes, despite supposedly holding a deal that will see Perez with the team until the end of 2021, but when an F1 driver needs to be ousted, he will be as the 30-year-old from Guadalajara well knows.

This would be a travesty as many believe him to be one of the more solid drivers on the grid and a big team calling is what he really needs to take it to the next level, but time might have run out on that option should the Vettel stories be true.

Furthermore, unless the sweetener was mighty it is hard to expect Sergio to roll out of the garage without a complaint, after all, companies from his country have kept the organisation afloat since the Force India days, and he was instrumental in Racing Point emerging from Vijay Mallya’s mess and into the hands of Lawrence Stroll and his consortium.

Meanwhile, Stroll junior, for whom the team was bought, is sure to stay put and the 21-year-old will benefit from working with a driver’s of the German’s experience and stature.

On the other hand, the prospect of Mercedes-power is sure to ignite a smile from Seb whose recent struggles are well documented as was the fact that Ferrari deemed him surplus to requirements.

As it stands, the options for 33-year-old Vettel are simple: Aston Martin, a sabbatical or retirement.

One imagines that, until Perez is healthy and back in a Racing Point cockpit, there will be denials and a “no comment” situation from all parties, until the deal is confirmed and made official by all parties.