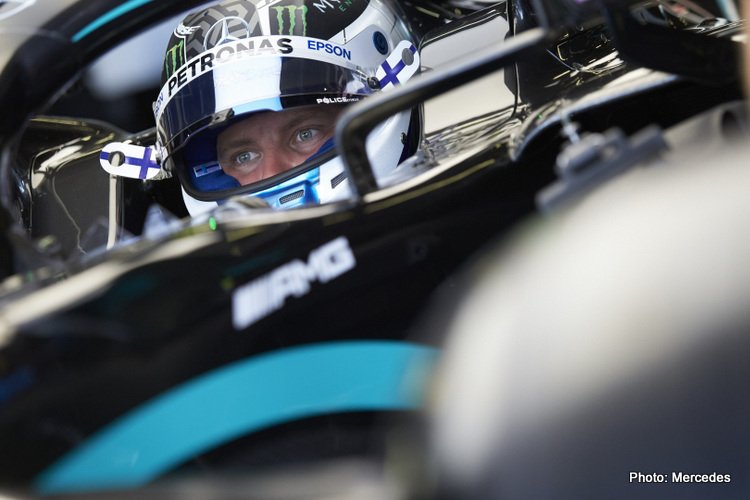 Mercedes’ Valtteri Bottas says he has not given up on winning the 2020 Formula 1 driver’s championship, despite his points deficit leader Lewis Hamilton.

Only five points behind his teammate coming into the British Grand Prix weekend, that margin looked set to increase to 12 with Bottas running second to Hamilton’s first when the Finn suffered late tyre failure.

Relegated out of the points entirely as he made his way back to the pits, Bottas finished 11th while Hamilton survived a similar predicament on the final lap to eke out the victory.

As a result, Hamilton’s lead is up to 30 points, and yet while it seems unlikely Bottas can overcome the deficit, he maintains he still has time to do exactly that.

“It’s not ideal but, for the moment, if everything goes to the plan with the calendar there are going to be more than ten races, but we just don’t know,” he told reporters after the race. “The best bet would be to be on top of the points all the time, so it’s a big loss of points.

“This kind thing we can’t really afford but, obviously, Lewis had a good race, but he also got away, in a way. What can I do? What can I say? It’s not ideal, but I can’t change what has happened, just got to move on and take the learnings and try again next weekend.

“Keep positive, because if I would now start thinking now that it’s done, then it would be done. I’m just not going to do that, I’ll keep pushing, keep believing, because you never know.”

Only four races through the 12 officially scheduled on the 2020 calendar, with more expected to follow, Bottas is still firmly within contention mathematically, but acknowledges he will need to lift his game significantly.

“I definitively need to maximise every opportunity and that’s going to be entirely up to me. Hopefully no other unlucky events, but I need to do it myself, I need to be on pole and win the races, that’s what it will take.

“I’m definitively going to take one race at a time and just think about that result, that weekend – that’s it.”