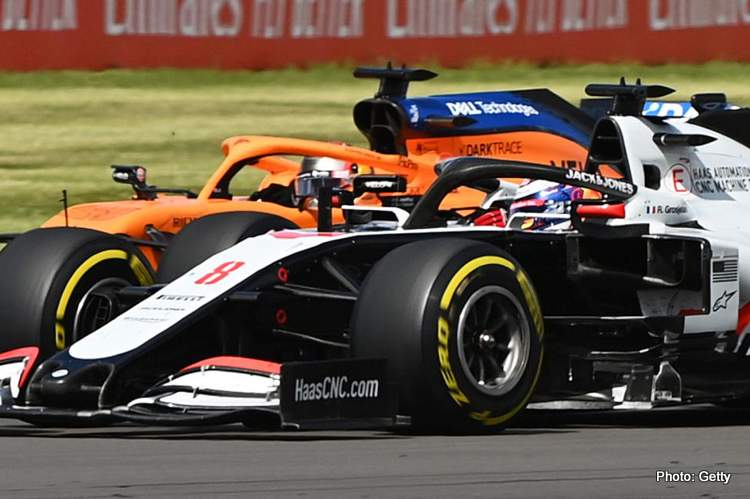 Romain Grosjean gave further ammunition to his many detractors by a disgraceful display of dirty driving during the British Grand Prix.

The Grand Prix Drivers’ Association chairman’s rental-kart tactics earned him a black and white flag from the Race Director Michael Masi for moving under braking with Carlos Sainz.

The stewards also reviewed the incident involving Grosjean and Renault’s DanielRicciardo and reported, “Grosjean explained that in both cases his moves were before the braking zone, although in the second case, it was closer.

“When it was put to the drivers that these were late moves in relation to the approaching car, or ‘Movement in Reaction’  and also potentially dangerous, they agreed on this as a general principle. Ricciardo agreed that this situation, while close, was manageable by him as the following driver.”

The added: “The Stewards issued a Warning, with the admonition that late movement in reaction to drivers following is also considered potentially dangerous and will be scrutinised by the Stewards.

Mark Webber – once labelled the Frenchman the “first-lap nutcase” and now, several years later little has changed – the Haas driver remains a menace.

Grosjean has found himself in the firing line following his antics during Sunday’s race at Silverstone which saw him initially shown a black-and-white flag for unsportsmanlike driving in weaving in front McLaren’s Carlos Sainz under braking.

The Haas driver was then forced to see the stewards for a repeat offence with Renault’s Daniel Ricciardo, although was only handed a warning.

Grosjean defended himself by stating he left a car’s width on each occasion, only for former Red Bull driver Webber to pick apart his argument.

Working as part of Channel 4’s commentary team across the race weekend, Webber did not mince his words: “I don’t think he understands the rules of engagement.

“He is moving around very late in defending. He is saying he is leaving a car’s width on the inside, which technically he is, but this weaving in the middle of the road at high speed… he has got to be even further across to show his intention earlier.

“I think Grosjean has a gross misunderstanding of what current grand prix racing is all about in terms of wheel-to-wheel combat.”

Grosjean also cited Max Verstappen, who became renowned for moving across onto another driver’s line in the braking zone of corners before cleaning up his act.

“He’s the chairman of the GPDA. He should know the rules. For me, Grosjean is borderline out of his depth in Formula 1,” added Webber of a driver who has been incident prone since his days in the F1-feeder GP2 Series.