The Day After: An explosive finish 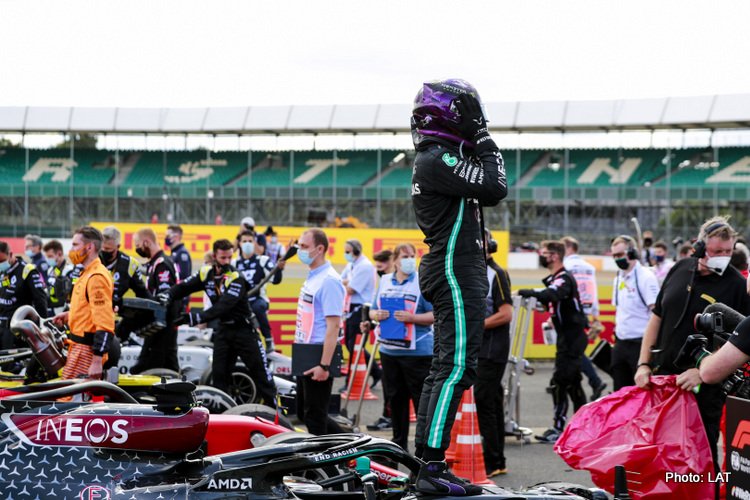 A win that, on paper, looked much like many of his others, Lewis Hamilton’s victory in Sunday’s British Grand Prix was in truth anything but.

Through 51 laps, the only question surrounding the Briton’s afternoon was who he would thank first in his post-race interview, until suddenly with one lap to go, it was a question of whether he would even make it to the finish, let alone win the race, as his front-left tyre disintegrated.

Indeed, as much as Hamilton has earned his ‘Formula 1 legend’ status with 87 career victories, this one was just lucky. Lucky that teammate Valtteri Bottas gave him some forewarning when the Finn’s front-left became the first to go on lap 50. Lucky that Bottas’ pursuer Max Verstappen pitted immediately afterwards, handing him a 34-second gap. And yes, lucky that enough rubber stayed attached to his front-left wheel rim to get his car across the line and earn a record seventh victory at his home race, and third-straight for the 2020 season.

Additionally, I think you can say that while this outcome doesn’t completely doom Bottas’ chances in the 2020 championship, they’re essentially left hanging by whatever was left of his tyre. Not only does he probably need to do something he’s never done in his career and win consecutive races, he needs to do it multiple times over, and against Hamilton, you simply wouldn’t bet on that happening.

However, something I would bet on is plenty of Pirelli talk in the next seven days. Was it their fault that not just Bottas and Hamilton, but Carlos Sainz – and possibly Daniil Kvyat too – suffered a similar fate? Or did the early pitstops under the safety car mean the drivers got too ambitious with stretching their tyres’ lifespan? Or what about the fact the teams unanimously decided to keep the 2019-spec tyres for this season instead of upgrading to the newer version Pirelli offered? Should they have not realised the cars would be faster, and the loads would be greater? There’s certainly plenty to ponder.

Will Pierre Gasly need a new seat fitting at Red Bull, or can they just reuse his old one?

Equalled his best-result with Renault in finishing P4, having to lick a few stamps and send them on his way. A quality drive from a quality driver.

Worst of the Day: Racing Point

A team that started the weekend with podium expectations, they were down a car before the race even started, and then spent the rest of it going backwards. Sure, the timing of the safety car might not have helped their strategy, but when you’ve got a ‘Pink Mercedes’ you have to do better than P9.

“Uhmmm, I think something happened to my left tyre also…” – Lewis Hamilton, for once playing it cool with his complaints on team radio.