Seidl: It was a sudden death of the tyre 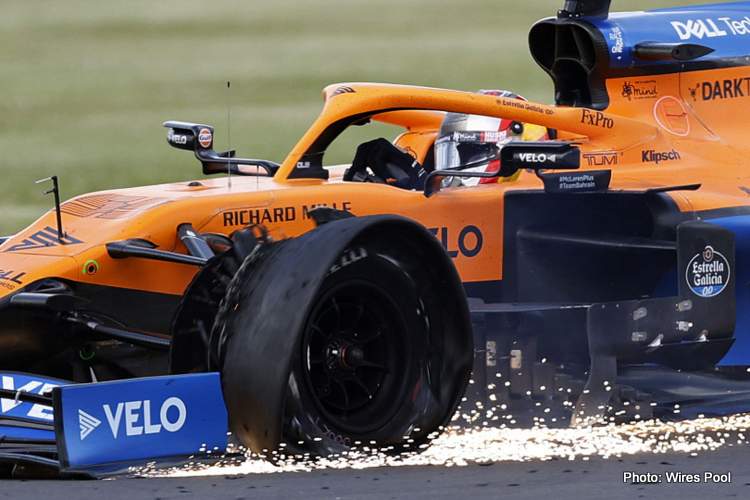 It was a scary moment when the left front Pirelli on the McLaren of Carlos Sainz decided to delaminate itself, without warning, on the final lap of the 2020 British Grand Prix, a similar fate suffered by Valtteri Bottas and Lewis Hamilton at the front of the field.

After a largely mundane and predictable race at Silverstone, the final laps proved to be decisive as Valtteri Bottas was in trouble with his front left disintegrating and causing him to go off track, and by the time the dust had settled a sure second place turned to 11th for the Finn.

Race winner Lewis Hamilton suffered a similar fate on his Mercedes but nursed it to win the race.

Not so for Sainz, what looked like a slam-dunk fifth place eroded to 14th and putting a cruel end to an impressive day’s graft in the McLaren.

The Spaniard never saw it coming as his boss Andreas Seidl explained to reporters, “No. It was a sudden death of the tyre, and obviously very disappointing at the moment for the entire team, especially for Carlos. But at the same time, that’s part of racing, that happens in racing.

“We didn’t have any signs of a tyre failure coming. We knew we had to manage the tyres for these long stints on the hards, but there were no concerns from our side or Pirelli’s side.

“I think it’s important now to not jump to conclusions early. It’s important to wait for the thorough analysis of Pirelli, together with the teams of what was actually causing these tyre failures. In theory it could always be down to some debris.

“So we need to wait for that, and I’m sure Pirelli will make the right conclusions taking into account also the expected ambient conditions for next weekend where it looks like we could get some really high ambient temperatures again.

“Then I’m sure they will make the right conclusions in terms of tyre selection – the question is if that needs to be reviewed, or if we get some restrictions in terms of how we use the tyres.

“I’m sure we’ll make the right conclusions with Pirelli in terms of safety. Safety always has the highest priority, but again at the moment, we can’t make any judgement [or] conclusion.”

“It’s important to look at the positive stuff from today, learn from what was not ideal,” added Seidl who will be satisfied that his team are at the sharp end of the midfield and looking upwardly mobile despite the misfortune.