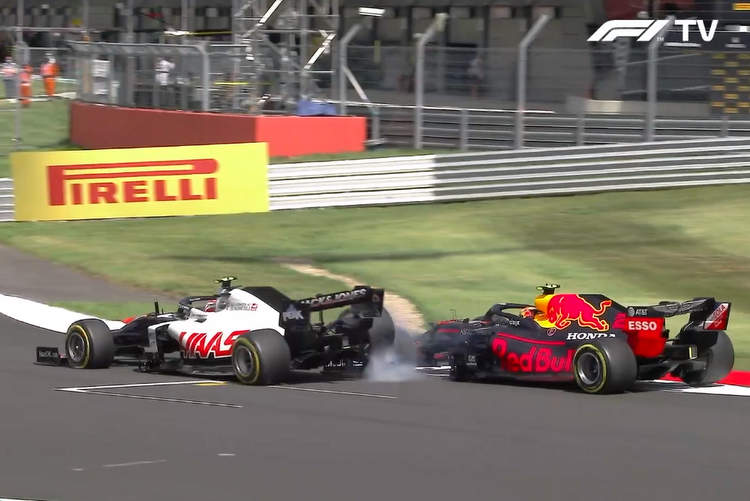 Alex Albon was handed a five-second penalty for his run-in with Kevin Magnussen at the start of the British Grand Prix, but the Red Bull charger says the blame should have been split “50/50”.

At the end of the opening lap, Magnussen battered the inside kerb on the exit of Vale and then plunged towards the apex at Club Corner only to find Albon already there on the inside.

The Haas driver was spun into the gravel trap and out of the race while his nemesis carried on to finish eighth.

“We were a little fortunate with punctures to get there, but it was an OK race,” Albon said. “The penalty… it was 50/50 to me.

“Kevin went off the track and the way he came on, there was a space there initially. At that point I realised either he doesn’t see me or the gap is closing very quickly.

“I tried to get away from it but at that closing speed it was just too much. Obviously we had the damage which was a shame.

“The pace throughout the race wasn’t too bad. We had to do a lot this weekend. P8 is not what we want, but it’s damage limitation.”

The incident was another unfortunate case of Albon being in the right spot at the wrong time, a description that practically sums up the Anglo-Thai driver’s season so far.

However, Red Bull team boss Christian Horner was also of the opinion that the clash between his driver and Magnussen was a simple racing incident. But Horner praised Albon for his recovery efforts.

“For me it was a racing incident, the five-second penalty was probably fair at the end of the day,” he said.

“I thought his recovery from there was excellent. We’ve seen it on numerous occasions, his ability to come back through the field. His pace in the race was very good.

“We just need to have a straightforward, boring weekend for him. I thought today, once again, he’s driven a very strong grand prix.”