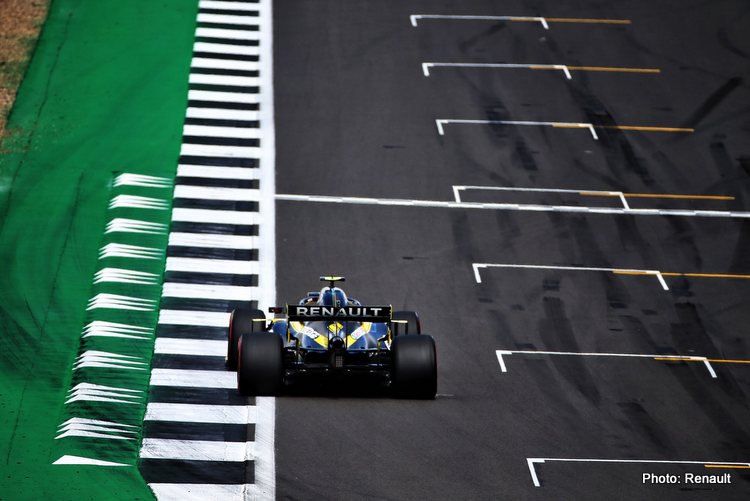 Renault managed to break through a chaotic 2020 British Grand Prix, emerging with an impressive points haul on the other side.

The tyre failures of Valterri Bottas and Carlos Sainz promoted Daniel Ricciardo and Esteban Ocon to P4 and P6 respectively.  A 20 point haul in midfield battle being fought by six teams in 2020.

Both drivers were involved in a race long battle for seventh, ultimately coming out on top. The pair managed their tyres well in a battle that encompassed both McLaren’s early on and Lance Stroll. Sainz, as mentioned, fell foul to Silverstone’s Pirelli curse late in the race. Stroll also experienced a dramatic fall-off in the second half of the race but managed to bring the Racing Point home without a second stop.

Both drivers were involved with some rather questionable displays of driving standards; Ricciardo almost caught out by a late moving Grosjean, Ocon almost colliding with Stroll.

Both drivers recorded their best results in F1 since their previous Italian Grands Prix; Daniel in 2019, Esteban in 2018. Ricciardo was just 1.1 seconds off of scoring his first podium in Renault colours having been chasing down a struggling Charles Leclerc.

“It was a crazy race at the end, and it feels really cool to take fourth place. We made a good start, jumped up to sixth and we showed decent pace.” said Ricciardo.

The Australian continued:  “The race really came alive and that was really good. We had some pace at the end and I was able to get Lando and then Carlos had a problem. I saw Charles [Leclerc] getting closer and maybe with a couple more laps we could have had a podium! We have another chance next week. We were assisted by some chaos, but we were definitely a top six car today and that’s pleasing.”

Team principal Cyril Abiteboul was equally impressed:“It was a very good result from a team perspective and one of our strongest since our return to Formula 1. It is particularly good here in Silverstone, a temple of the Formula 1 championship and one of the home races for the team.”

Abiteboul mentioned that Silverstone’s layout has ‘confirmed the strengths and weaknesses of the car’. More attention needs to be placed on the high-speed corners, an area where Renault are losing most of their time to their direct rivals.

As expected, Renault have also lodged another protest against the legality of the Racing Point RP20; it’s brake ducts in particular. The back and forth protesting and denials are expected to continue until the FIA investigation reaches a conclusion.