Bottas: I was trying to put the pressure on Lewis 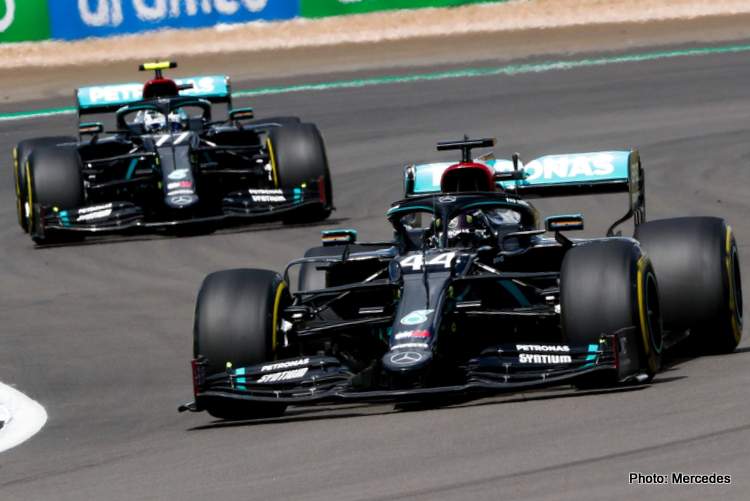 Its abundantly clear that the only thing that can stop the perfect Mercedes W11 from scoring a one-two in every race is if they mess it up themselves as they may have done at the 2020 British Grand Prix.

Looking set for another effortless one-two, with the finish line in sight, the left Pirelli tyres on the two leading Black Arrows began delaminating as it became shockingly apparent that Pirelli had messed up the maths. The Mercs were not alone.

By the time the dust had settled, Valtteri Bottas went off track and slipped down to 11th on the final lap, while his teammate Lewis Hamilton nursed his car over the line to win the race, the left front on canvas and hanging by threads.

Begging the question: why was the #77 car allowed to push so late in the race when it should have been clear that holding station was the answer?

In other words, did Mercedes blow a near-certain one-two by not containing their lads?

Whatever the case, Hamilton already has a hand on that record-equalling seventh F1 title and it is now his to lose in this shortened season in a car.

Yet again Bottas – the only guy with the kit to take the fight to the main man – was by floored by circumstances but it is also fair to say he had no answer to the #44 car since qualy on Saturday, where he was three-tenths shy on Hamilton’s pole-winning time. And Hammertime required…

There is no escaping the truth: Bottas, since he joined the perennial world champs in 2017, has not shown the capacity to match, let alone beat his teammate which is a shame as there is nothing that comes close to the Mercs this season… and Lewis is becoming untouchable even at a canter.

Post-race at Silverstone on Sunday, Bottas found himself lamenting, “It’s a really disappointing result for me. I got very unlucky with the puncture; everything was going OK until that point.”

Ironically, this time, it may well have been Valtteri’s attempts to take on his teammate, late in the race, that messed up his tyre management and almost cost the team the race that was theirs to lose. Perhaps he should have held station and dial down the pressure, and bank second place, but he thought otherwise.

And admitted as much in the team’s media debrief, “I was trying to put the pressure on Lewis, but we knew it was going to be a long stint on the Hard tyre. Towards the end, I was starting to get more and more vibrations on the front left. I didn’t see any debris or anything.”

“I reported the vibrations and started to manage the tyres, but then the tyre failed suddenly on the start/finish straight and I had to complete a full lap back to the pits which cost me a lot of time.

“I am sure there will be lots of learnings to take from this weekend, so we’ll take those and move onto the next weekend,” added Bottas who lies second in the championship standings, albeit 30 points adrift of Hamilton.