A blue weekend for the Pinks in their backyard 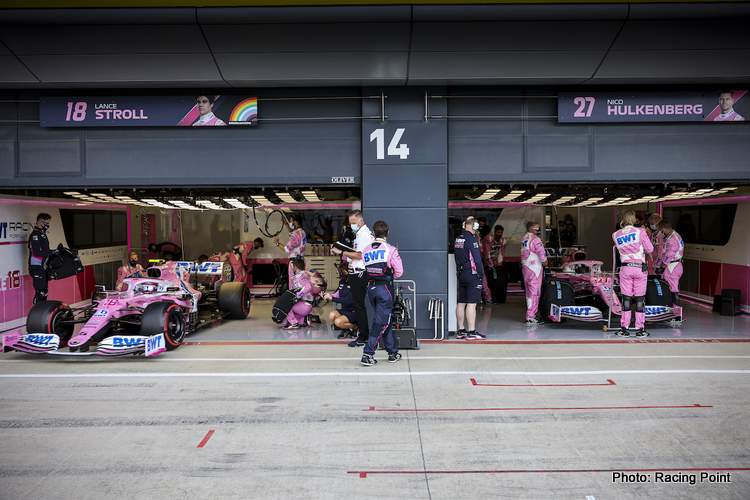 Their headquarters are a walk away from the paddock, and with a rocket of a car much was expected from Racing Point ahead of the 2020 British Grand Prix at Silverstone on Sunday.

The rot started with the terrible news on Thursday that luckless Sergio Perez had contracted COVID-19 and the well documented fast-tracking of Nico Hulkenberg to the seat. A true feel-good story emerging from the sad Perez news.

The much-vaunted Pink Mercedes (namely a copy of the mega-W10 of last year) went AWOL on home tarmac and, rather, resembled a Force India as neither driver got it hooked up during a challenging qualifying on Saturday.

It got worse on Sunday when a drivetrain seizure meant a DNS for the hapless Hulkenberg who did not even leave his pit garage – fairytale to misery for the German who was remarkably cool in the pitlane immediately afterwards.

He later summed up, “It’s a real shame that I couldn’t start the race and I feel for the team because they did everything to get me onto the grid. I’m very thankful to everyone for their help.

“It’s been a jump into the deep end this weekend, but I’ve enjoyed the opportunity to work with the team again. It would have been great to score a good result in the race as a reward for all our hard work,” added the driver who did not start his 194th Grand Prix…

In the sister car, Lance Stroll managed to qualify with the medium Pirelli and was looking handy in the top ten among the softer shod rivals. One expected the Racing Point to go longer and stronger towards the end of the race, but the first safety car negated the advantage and that was that.

The Canadian never recovered and by the end had simply run out of defences, “We were able to keep up our run of scoring points in every race this season, but I’m disappointed to only finish in P9 and we need to go away and look into the reasons why.

“The balance of the car was better today and I expected us to be more competitive, but we slipped back in the race. It wasn’t our day today, so now we need to focus on next weekend and make sure we come back stronger and show what the car is capable of.”

Stroll spared a thought for his new teammate, “It’s a shame Nico couldn’t start the race because he’s done a good job this weekend.”