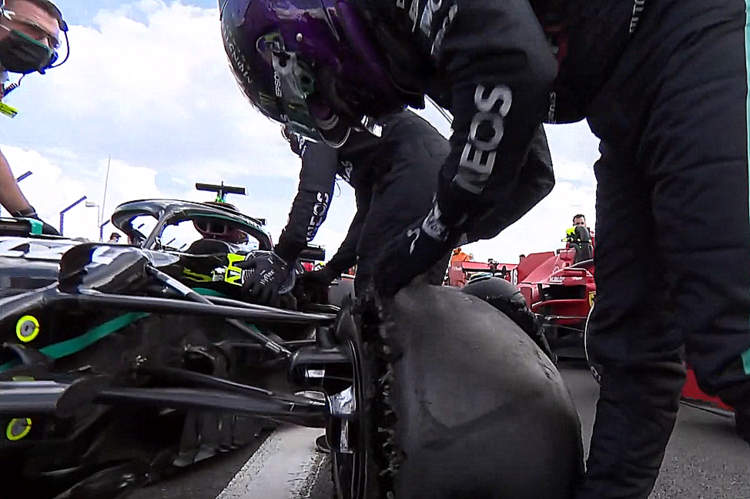 A race that went from 0-100 in the blink of an eye, Lewis Hamilton was able to just hang on in a dramatic finish to the British Grand Prix on Sunday.

Indeed, with two laps to go, the story of the race was looking very different, with Hamilton leading Bottas in a comfortable Mercedes 1-2.

Suddenly, the Finn’s front-left tyre delaminated, costing him nine positions as he nursed his car to an emergency pitstop, the Mercedes’ pitwall subsequently instructing Hamilton to take it easy to the finish.

Alas, Hamilton was helpless as his tyre started to suffer the same fate on the final lap, although his initial 34 second gap over Verstappen – created after the Dutchman took a ‘free’ pitstop in response to Bottas – proved to be enough of a buffer.

Asked about the late ordeal afterwards, Hamilton said it gave him a “heart in mouth king of feeling”.

“Up until that last lap everything was relatively smooth sailing, the tyres looked great,” he said. “Valtteri was really pushing incredibly hard. I was doing some management of tyre, he looked like he wasn’t doing any, so when I heard that his tyre went I was just looking at mine and everything seemed fine.

“The car was was still turning no problem and I was thinking maybe it was ok. So the last few laps I started to back off but then down the straight it just deflated.

“Just driving to keep the speed off, oh my god, I was just praying to get around and not be too slow. I nearly didn’t get around the last few corners.

“Maybe we should have stopped.”

And while Verstappen could be forgiven for ruing what might have been, the Dutchman said he was pleased with the result regardless.

“It’s lucky and unlucky. The tyres didn’t look great with 10 laps to go and I was already on the radio. Then Valtteri got a puncture so I came on the radio and said I’m going to back it out. Then of course they boxed me to go for the fastest lap.

“Then unfortunately Lewis got a puncture himself. But I’m very happy with second, it’s a very good result for us.”

Completing the podium was the Ferrari of Charles Leclerc, the Monegasque capitalising on the late drama as he had done at the season-opener in Austria.

In fourth was Daniel Ricciardo, who was the prime beneficiary of the other tyre blowout suffered by McLaren’s Carlos Sainz, allowing the Australian to match his best performance for Renault, set at last year’s Italian GP.

Lando Norris was fifth in the other McLaren, ahead of Ricciardo’s teammate Esteban Ocon, the latter earning his best result so far in his F1 comeback.

For his part, Albon saw a difficult weekend continue on Sunday, as he earned himself a five-second time penalty for colliding with Haas’ Kevin Magnussen on lap 2, the incident ending the Dane’s race and bringing out the first of two safety cars.

Lance Stroll finished ninth for Racing Point in a disappointing performance, the Canadian proving unable to hold off several of his midfield rivals in wheel-to-wheel battles.

Rounding out the top-ten was the Ferrari of Sebastian Vettel, the German managing to earn a point despite a dismal showing, thanks to Bottas’ late drama.

Behind the Finn, Antonio Giovinazzi was 12th, beating George Russell in the battle of the backmarkers.

The aforementioned Sainz was ultimately 14th, narrowly ahead of Nicholas Latifi and Romain Grosjean, the latter doing no favours to his standing in the paddock with two controversial defensive moves.

Kimi Raikkonen was the last of the finishers, and the only driver to be lapped.

AlphaTauri’s Daniil Kvyat joined Magnussen on the DNF list after an apparent puncture caused his car to veer into the barriers, bringing out a second safety car for the day.

However F1 returnee Nico Hulkenberg was unluckiest of all, his race over before it began due to a power unit failure. 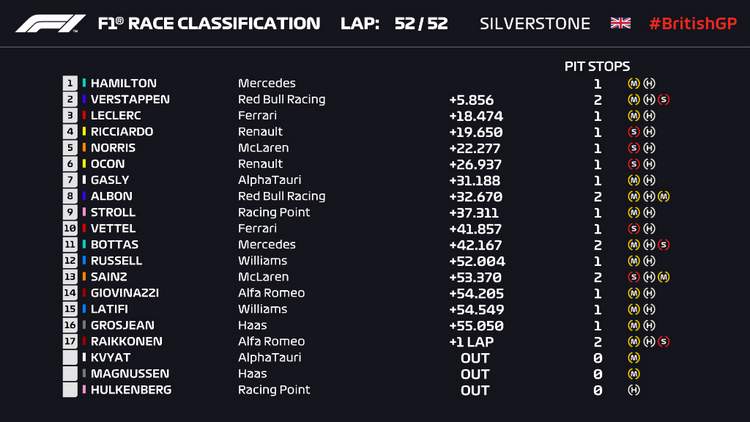 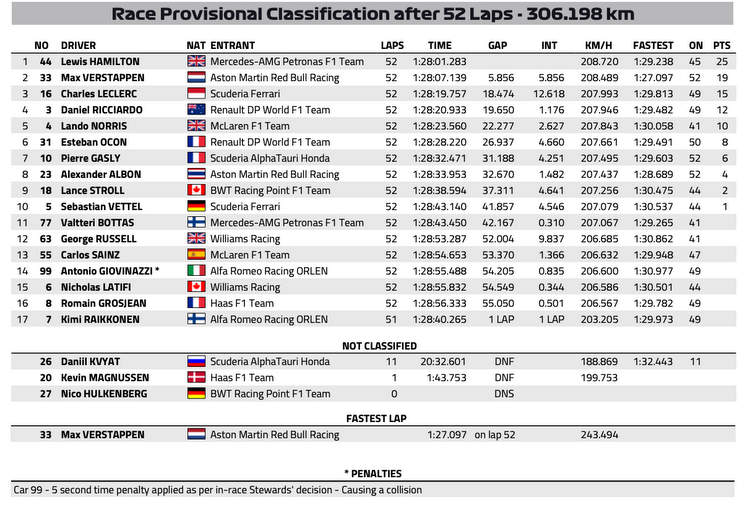 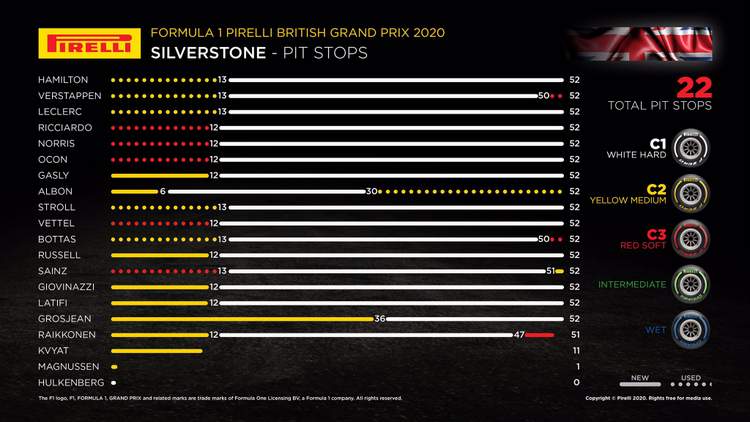 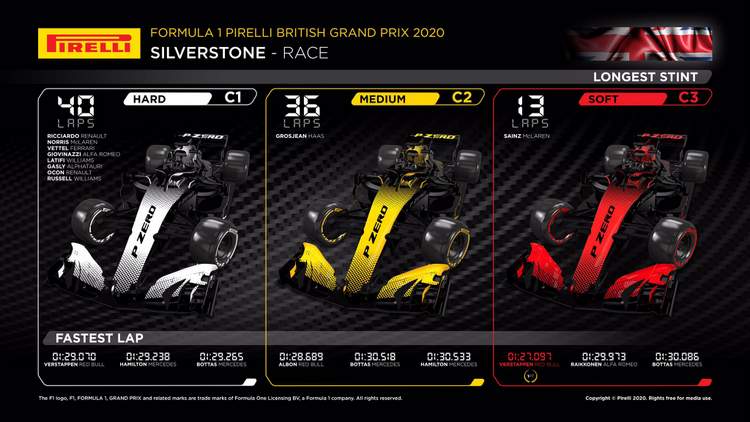 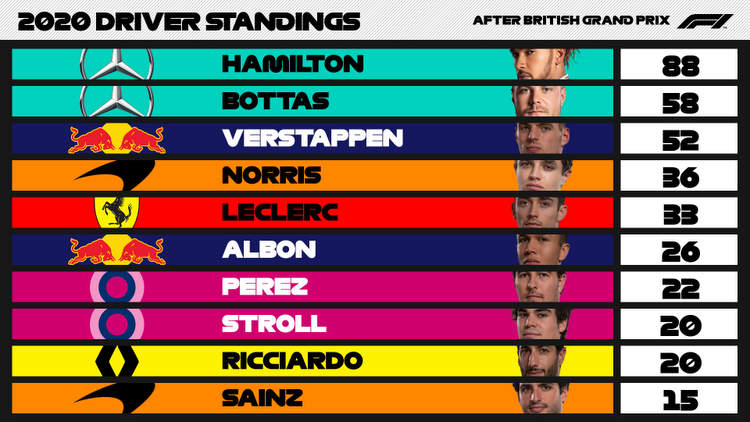