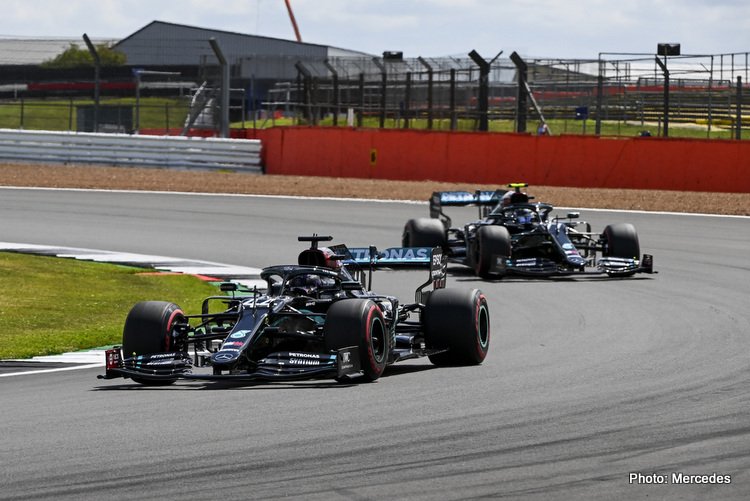 Mercedes can only leave Silverstone this afternoon grinning after the team put on a dominant showing in qualifying for the British Grand Prix.

Despite a spin in Q2 which brought out the red flags, Lewis Hamilton leads a Mercedes front-row lockout beating teammate Valterri Bottas by three-tenths of a second in Q3.

Both cars will begin tomorrow’s race on the medium tyre having progressed into the final stage of qualifying with a 1.5 second cushion.

Nearest rival Verstappen was only able to manage a 1:25.3, a second off of Hamilton’s new lap record of 1:24.3.  With Albon again failing to make Q3, it was a disappointing show for Red Bull who looked to close in on Mercedes with a new upgrade package brought to Silverstone.

“We can be very satisfied with our Qualifying session today although I guess we’re not making many new friends out there.” said Wolff.

“Our car was working very well today, it was really in a league of its own and the performance shows all the smart work that has gone into it at the factories just down the road from here.

“Both Lewis and Valtteri really delivered today as well and were able to extract everything out of the car. We can be really happy the result today, but we know that the points are scored tomorrow, and our competitors will put up a hard fight.

“We’re determined to give it everything and carry our momentum into the race to hopefully put on a good show for everyone supporting from home.”

The result continues Mercedes 100% record in qualifying having taken pole in every race thus far. Silverstone’s high-speed nature was always expected to suit the champions well, the question was just ‘how well’.

Now we know the answer to that question, tomorrow’s race looks to be a straight forward affair for the Brackley based team. But in a year where anything and everything has happened, will the same go for the British Grand Prix?