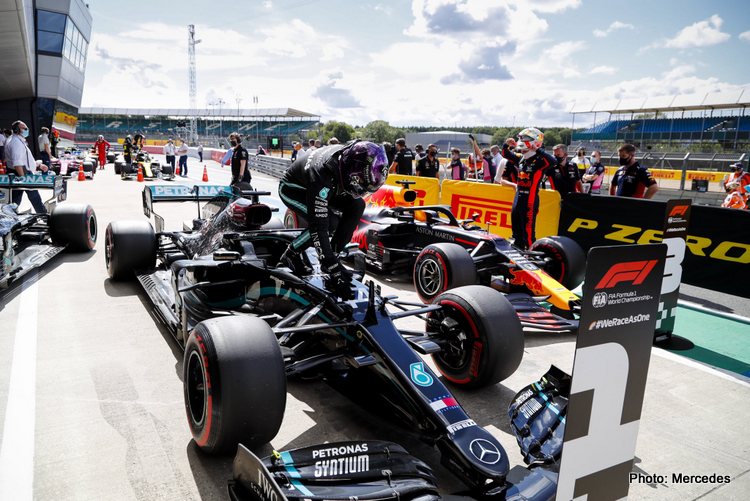 Lewis Hamilton is the pole-sitter for the 2020 British Grand Prix, delivering another sterling effort in qualifying on Saturday.

A day that saw the track record repeatedly smashed, Hamilton lowered it to a remarkable 1:24.303 to beat Mercedes teammate Valtteri Bottas by 0.313 seconds, earning him his third-straight pole of the 2020 Formula 1 season.

Making a significant improvement in Q3, Hamilton actually seemed the less-comfortable of the two Mercedes drivers through the first two sessions, particularly after suffering an off in Q2 that necessitated a red flag to clean-off the gravel he had sprayed onto the track.

“Qualifying is a lot about confidence building and man, I was already down and down in the first sector every lap,” Hamilton said afterwards. “I don’t know how, but I took some deep breaths and managed to compose myself. Q3 still wasn’t perfect but still a really clean lap, and the second one even better. It never gets old that’s for sure.”

Conversely, Bottas rued the fact he was unable to build on his Q1 and Q2 performances.

Behind the Black Arrows, it was another class entirely, with P3 Max Verstappen a second off the lead in his Red Bull, although he said afterwards he was pleased despite the significant deficit.

Certainly it was a strong showing compared to his teammate, as Alexander Albon went out for the second-straight race in Q2 in a performance that will raise serious question marks over his future with the team.

Charles Leclerc was fourth for Ferrari, delivering his strongest qualifying performance of the season, and one that similar to Verstappen, ran in stark contrast to his teammate as Sebastian Vettel’s whose weekend continued in qualifying 10th, 0.912s behind the Monegasque.

The Renault pairing of Daniel Ricciardo and Esteban Ocon were eighth and ninth respectively, the Enstone outfit likely to be very pleased to be ahead of the aforementioned Vettel.

Just outside the top ten, Pierre Gasly was unfortunate to miss-out on Q3, his time of 1:26.501 equal to Lance Stroll but set after the Canadian’s.

Albon was 12th, although his performance can be explained somewhat by his severely disrupted build-up to qualifying.

Nico Hulkenberg was P13 in his first qualifying session in nearly nine months, the German being unable to extract the same pace on the soft tyre that teammate Stroll had on the mediums in Q2.

Daniil Kvyat and George Russell were 14th and 15th, the latter now having made Q2 for a third-straight race weekend.

Last to miss the cut in Q1 was the Haas of Kevin Magnussen, the Dane just 0.006s ahead of Alfa Romeo’s Antonio Giovinazzi.

Kimi Raikkonen and Romain Grosjean followed in 18th and 19th respectively, with Nicholas Latifi bringing up the rear in a very underwhelming performance relative to his teammate. 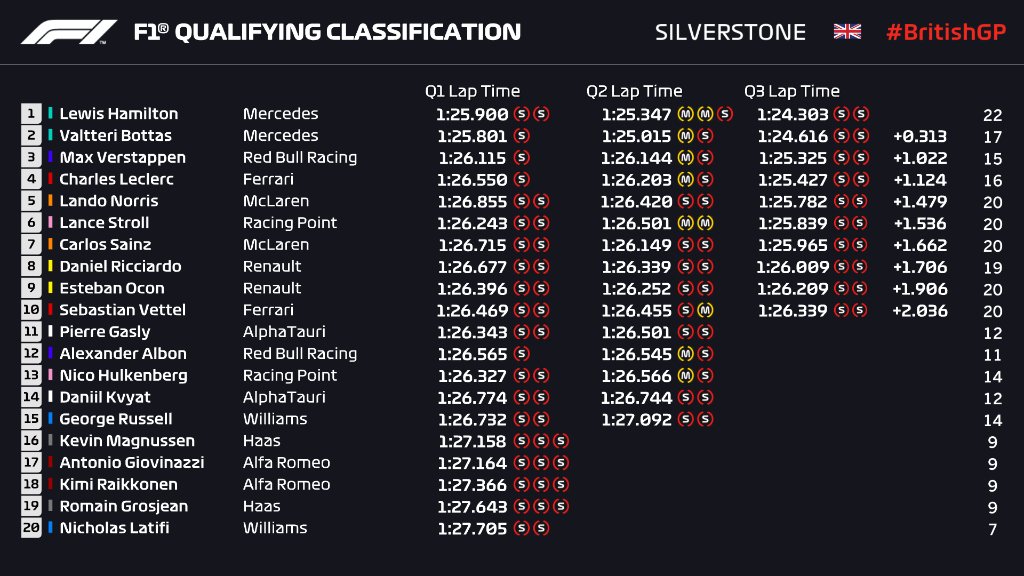