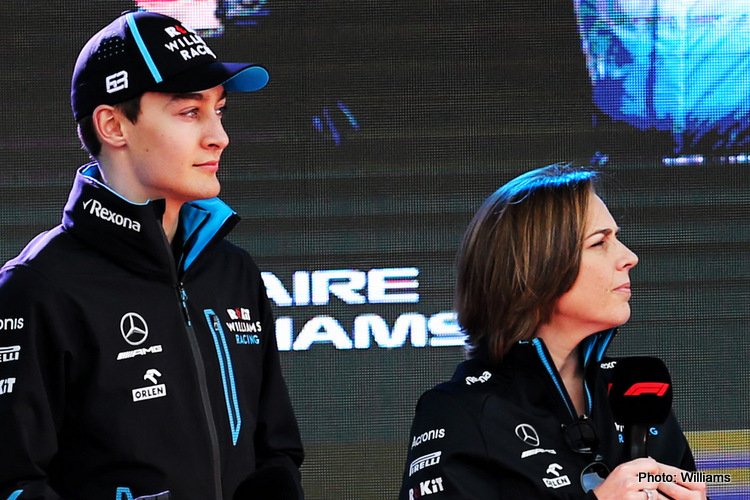 Now in his second year of Formula 1 with Williams, Russell has established himself as one of the hottest prospects in the sport, particularly with his back-to-back P12s in qualifying for the Styrian and Hungarian Grand Prix, despite a car that continues to lack significant pace.

Appearing on the F1 Nation podcast, Williams was effusive in her praise when asked if the 22-year-old belonged “in the same bracket” as drivers such as Damon Hill, Nico Rosberg and Nigel Mansell, all of whom passed through the team, and all of whom won drivers’ championships.

“Yes, 100 percent, and I would move heaven and earth to make George a world champion at Williams,” she said.

“George is his own person, but the talent is absolutely there. Combined with the commitment, dedication and singular focus he has, I can’t speak highly enough of him. We’re just very lucky he’s in the team with us.”

Unfortunately for Williams and her eponymous team, Russell is likely to be called back to his parent team Mercedes at some point in the near future, a situation that reminds her of Valtteri Bottas’ departure in 2017.

“I was nervous because he is so good. I didn’t want to lose him, but equally I’m not one of those people who will stand in someone’s way when they have got a great opportunity,” she said.

“I think I proved that with Valtteri Bottas when he went to Mercedes a number of years ago… but that hasn’t happened and I’m pleased that George is staying with us. We have him for another year and he’s a joy to have around the place.”

Indeed, Russell has confirmed he won’t be leaving the Grove outfit until 2022 at the earliest, and while he is unlikely to challenge F1’s front-runners in the interim, Williams thinks the adversity he has experienced is making him a better driver.

“The way he talks to the engineers and the rest of the team, he’s learnt that a driver can have a real involvement in leading a team, particularly, when things aren’t going well,”

“Having been in a team that isn’t having the best time will make him stronger. He hasn’t had it easy and it will put him in better place in the future, it will make him a better driver.”