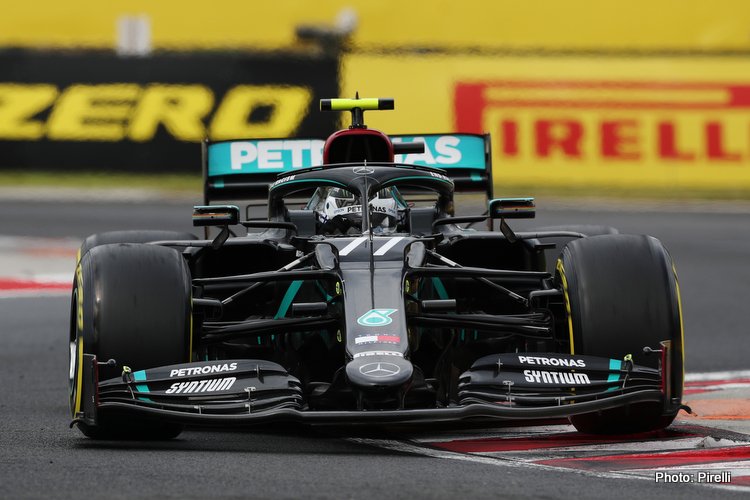 In what can reasonably termed a disappointing result, Bottas was quickly demoted from his P2 start position after trying to self-correct a jump start, and was unable to pass Red Bull’s Max Verstappen to regain it in the race’s latter stages.

“Now, luckily, he was able to pull the clutch and avoid a jump start. Now, there’s an automatic system that will detect where the car is and when it has left the grid box. And the car can sit within a reasonably wide position on that grid box without detecting it, and because Valtteri hadn’t moved far he was still within range. So, the system didn’t think it was a jump start because he was still within his box when the lights actually went out.

“What it did do, though, was cost him an awful lot of places because resetting and getting ready to go meant that everyone else was off and around him by the time he was getting up to speed.”

P6 heading into the first corner, Bottas had effectively wasted his Mercedes W11’s significant pace advantage over the rest of the field, and spent the rest of the race trying to claw his original position back, instead of fighting teammate Lewis Hamilton for the win.

Unfortunately for the Finn, he was never able to get past Verstappen, although he got within a second shortly before making a third pitstop for fresh hard tyres on lap 49. Having to close the gap again, he was 0.750 seconds behind the Dutchman at the flag.

“The decision to do that extra stop with Valtteri at the end and go onto the hard tyre was really just because we thought that would give us the best chance of overtaking,” explained Shovlin. He’d got up behind Max Verstappen but he wasn’t really able to get through and the tyres were too similar in age to actually get that tyre delta that allows you to do it.

“The other thing you could see from Max was actually when Valtteri was behind him, he was managing his pace, so he was able to drive off the pace, looking after the tyres and still comfortably keep Valtteri behind him. When Valtteri came in, Max picked up his pace, so he had to push because Valtteri had a bit of time to make up obviously with the pit stop but he was on a faster tyre. The reason it was the hard is that we only had two mediums, we’d used them both by that point and the soft tyre was not very good.

“The hard tyre was actually very robust, and it could deal with that succession of fast laps that Valtteri was having to put on it. Unfortunately for us, the race was a bit too short, I think if Valtteri had had a couple of laps at the back of Verstappen, he could have probably made a move stick. But as it happened, he only just caught him in the very closing stages of the race and unfortunately this time it didn’t work out for us.”

The leader of the driver’s championship coming into the weekend, Bottas is now second on 58 points, 5 behind Hamilton.