Wolff: George is very important for the long-term 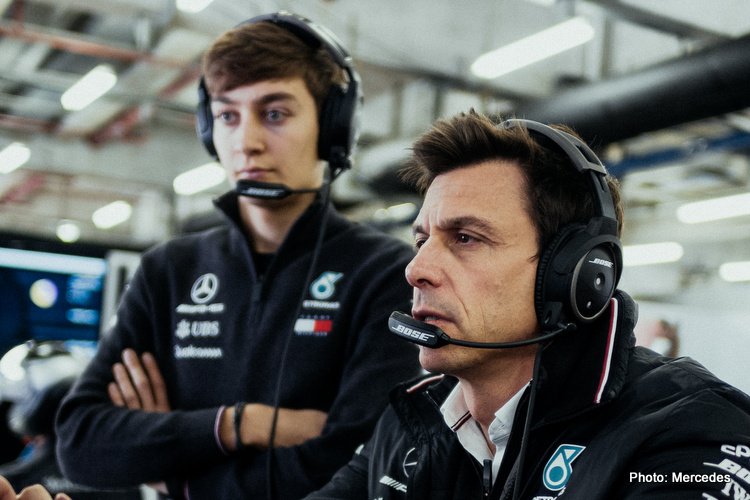 Mercedes boss Toto Wolff says George Russell remains in the team’s future plans, even if it will continue with its current lineup for the 2021 Formula 1 season.

The 2018 Formula 2 champion, Mercedes junior Russell is widely considered one of the hottest prospects in F1, but has been plying his trade since 2019 at backmarkers Williams, with the seats at the Silver Arrows occupied by Lewis Hamilton and Valtteri Bottas.

Asked about his future over the Hungarian Grand Prix weekend, the 22-year-old Russell confirmed that he would be staying at the Grove outfit for at least another year, but Wolff has moved to reassure the young Briton that he remains firmly in the picture.

“I think we said it in Austria, we are very happy with the line-up that we have,” he told crash.net. “Valtteri and Lewis perform well, they get on really well with each other, which is important for the dynamic within the team and the engineers really appreciate their feedback.

“That’s one thing, but on the other side George had a three-year contract with Williams that runs one more year and Claire made very clear that she sees George as an important asset to the team, and from that side one must respect the contractual situation.

“George and us knew what we were getting ourselves into two years ago, Williams gave George the opportunity to come into Formula 1 and this is why the decision that Williams takes, we respect very much.

“On the other side, it doesn’t mean that if George would be free he would find a guaranteed slot at Mercedes. Valtteri and Lewis are our drivers today and loyalty is something that is very important to us.”

Certainly six-time champ Hamilton seems to have a seat with the team for as long as he wants it, but it has been speculated that Bottas’ struggles to keep-up with his illustrious teammate mean he could be replaced.

Indeed, Bottas’ contract has only been extended in one-year increments since joining the team in 2017, with former-Mercedes junior Esteban Ocon in contention for his seat last year before Wolff ruled in the Finn’s favour.

Fortunately for Bottas, it seems he won’t have to be quite as concerned about his chances of re-signing this season, although Wolff conceded that that could change in the near future.

“We are always looking at the long-term picture,” he said. “and George is someone who is very important for the long-term but not for 2021.”