Off Camber: Your achievements can stay, but your attitudes can’t 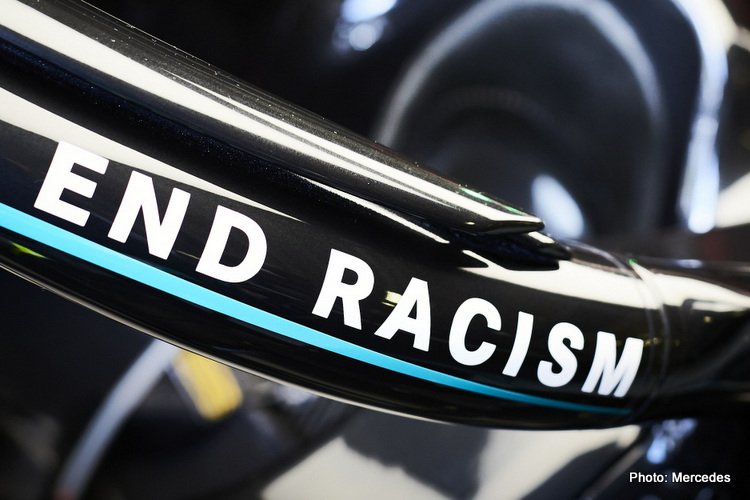 The murder of George Floyd on 25th May saw the Black Lives Matter message thrust back into the media spotlight. Two months on we are still talking about it, even in Formula 1 and rightfully so.

Protests, violent and peaceful, broke out across every continent in support of the ‘Black Lives Matter’ message and to fight against police prejudice, discrimination and racially motivated violence against black communities.

Gestures to support the movement have made their way into sports, starting with football through the Bundesliga and English Premier League where all 22 on-pitch players, officials and those on the sidelines kneel in unison ahead of kick-off.

There was talk of F1’s response ahead of the Austrian Grand Prix. As the first international sporting event to get back underway post-Covid, it was agreed that something should be done.

The Austrian Grand Prix at the beginning of July saw 13 drivers join Lewis Hamilton in taking a knee ahead of the national anthem. All drivers wore an ‘End Racism’ t-shirt.

“There is a story, at least one out there, that is really incorrect. [It had been alleged that Hamilton had pressured his competitors into kneeling before the start of the Austrian Grand Prix]

I never requested or demanded anybody to take the knee. I never even brought it up. It was brought up by Formula 1 and the GPDA.” Said Hamilton after the first race of the season.

“When we did the drivers’ briefing, Seb and Romain both brought it up and asked the drivers whether they would do it or not. There were obviously several that said they wouldn’t. And I let everyone just say what they wanted to say and I just opened up to them and said ‘look guys, just so you know, I will be doing it, but you do what you feel is right’.”

Six drivers, as you’ll be aware, opted not to take a knee. The action of ‘taking a knee’ was thrust into the mainstream when NFL player Colin Kaepernick knelt during the American national anthem on the grounds that he was ‘not going to stand up to show pride in a flag for a country that oppresses black and people of colour’.

The gestures and the T-shirts have remained in F1 since but have weakened in strength. Mercedes have adopted a black livery for 2020 to show their commitment to stand against racism and strive for diversity.

The commitment is seemingly there from most teams, you can argue about morals between yourselves, but it is the drivers who are letting it slip. Drivers are forgetting their t-shirts and failing to even stand as one in the fight against racism. It may only be a gesture of support, but the message and the images paint a thousand words. The whole purpose of the action is to stand and kneel in solidarity. It has already been said that drivers won’t be pressed into kneeling, no matter the reservation, but when in the global spotlight, for the love of God, turn up on time.

It’s understood that the main reservation held by those drivers that have opted to stand is to avoid being “dragged into politics”. These drivers fail to realise they have done exactly the opposite and dragged themselves into politics through their lack of judgement.

Voicing your concerns about racism is not political. Fighting against injustice and a fairer society for all is not political. Nor is striving for a society in which we can all live in parity ‘woke’. It’s a flawed point of view but I digress…

A big issue recently has been how outspoken F1’s ‘Old Guard’ have been. Mainstream media outlets have been reaching out to the older, more “traditional” members of the motorsport community who are yet to rehash their outdated views in hopes of a sound bite to brandish across their pages for the next few days.

Former F1 owner Bernie Ecclestone was broken down by CNN:

“I don’t think it’s going to do anything bad or good for Formula One,
“It’ll just make people think which is more important. I think that’s the same for everybody. People ought to think a little bit and think: ‘Well, what the hell. Somebody’s not the same as White people and Black people should think the same about White people.’
“In lots of cases, Black people are more racist than what White people are.”
Meanwhile, three-time world champion Jackie Stewart speaking on Good Morning Britain has said:
“I think Lewis has been a great example to lots of people. He’s quite vocal about these elements, I don’t think there’s as big a problem as there might seem.
“There is no resistance for change if someone is clever and good at what they do. They will be accepted in Formula 1.
“What we need to do is be sure whatever colour, man or women, they have to be educated in that particular area of engineering and if we had different races wanting to get into Formula One they have to do it through education.”
Finally, more recently, Mario Andretti is perhaps more critical of the desire for change:
“I have a lot of respect for Lewis, but why become a militant? He’s always been accepted and he’s earned everyone’s respect,

“I think the whole point of this is pretentious. I feel that way. And it’s creating a problem that doesn’t exist.

“Painting the car black… I don’t know what good it will do.

“I’ve met drivers from different backgrounds, races, and I’ve always welcomed them with open arms. In motor racing it doesn’t matter what colour you are; you have to earn your place with results, and that’s the same for everyone.

“I wish politics didn’t get mixed up with sport…”

So there you have it. Three privileged white males, youngest being Andretti at 80, you can only expect have never felt the distress of racism first hand offering their advice on how to tackle racism.

All three were amazingly successful during their day but we cannot allow their attitudes to hold back progression. I’m not suggesting that we scrap their records and achievements from the history books, that’s not how sport works. But what must be done is that F1 ensures they distance themselves from the opinions of the folk who aren’t willing to move with the times.

In response to Andretti’s remarks, Hamilton shared the following:

“This is disappointing but unfortunately a reality that some of the older generation who still have a voice today cannot get out of their own way and acknowledge there is a problem,” Hamilton wrote on an Instagram story.

“Again, this is plain ignorance but that will not stop me from continuing to push for change. It is never too late to learn and I hope that this man who I’ve always had respect for can take the time to educate himself.”

It was only at the Styrian Grand Prix that the second person of colour stood on the F1 rostrum. Mercedes’ trackside fluid expert Stephanie Travers represented her team alongside the first PoC to stand on the podium – Lewis Hamilton.

Until that happens, the views of these three individuals alone are proof that F1 does indeed have a race problem. Meanwhile, those more concerned about protecting their profiles from the radical Black Lives Matter movement than solidarity continue to hold the flame passed down by the Old Guard and keep it alight.