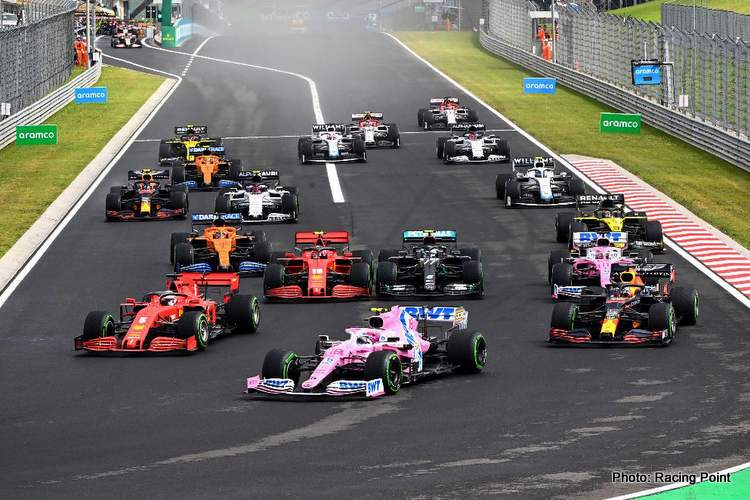 For the second week in a row Lewis Hamilton romped home from pole position to secure an impressive win, this time around at the Hungarian Grand Prix in Budapest on Sunday.

The six-time F1 world champion secured pole by just over a tenth from his teammate Valtteri Bottas and led from the outset, with the Finn falling back at the start.

Despite having crashed on his installation lap, Max Verstappen and his Red Bull team recovered in time to earn a second place finish, with Bottas having to settle for third.

Here are how the drivers rated at the Hungaroring.

A second consecutive perfect score for the Brit, Hamilton was simply untouchable during the race. An impressive qualifying performance put him in the box seat, but the 35-year-old was eight seconds clear within three laps and never looked back.

Crashed on his installation lap and was lucky to start the race, while he will have been disappointed with seventh in qualifying regardless of the struggles at Red Bull. However, this was a brilliant race performance and he did brilliantly to hold off Bottas at the end to take a deserved second place.

Good in qualifying despite being just short of Hamilton, but this was a poor race from Bottas. His terrible start saw him drop way back, while his overtaking against slower cars was clumsy. Could not get past Lance Stroll without the assistance of strategy, before failing to replicate Hamilton’s performance of 2019 when chasing down Verstappen.

Another solid weekend from the Canadian, who looks to have really improved his qualifying. Ran second for a while and was never at risk from his teammate, so should take plenty of confidence from this race.

Things were looking bleak after he was out-qualified by George Russell in a Williams, but Albon made up for that in the race. Pulled some nice moves and never gave up and was rewarded with a decent fifth-place finish.

Really good weekend for Vettel who beat his teammate in qualifying for a second consecutive weekend, before maximising his race potential despite a slow stop. The fact he ran wide and let Albon through is all that prevents him from scoring higher.

Lost to Stroll in qualifying and dropped back at the start, seventh was not the result Perez would have been hoping for given the pace of his Racing Point. With rumours about Vettel circling, this was not the show of strength he would have wanted.

Probably got as much as he really could be expected to out of that car, this was a quiet but competent weekend for Ricciardo. Just missed out on Q3 at a track that does not seem to suit Renault before running well for a long stint on the mediums that secured him a few points.

Slightly anonymous for the Spaniard in a race that clearly did not bring out the best in the McLaren car. Beaten by Lando Norris in qualifying and only moved up to ninth thanks to a Kevin Magnussen penalty, although he did make a few nice moves coming from the field.

Brilliant from the Dane, who would have been on an absolute hiding to nothing starting on wets but decided to change at the last second. Even though this would lead to him being penalised, he executed the race perfectly and seemed delighted to get some points for the struggling team. Knew when to fight and when to save time, this was a mature performance from Magnussen.

Unlucky with tyre strategy in a race when everyone was simply waiting for the rain, Leclerc was one of the drivers who did not benefit. Showed good speed, but that Ferrari is struggling and did not have the pace to cut through the field.

Another driver who went under the radar, Kvyat struggled due to strategy. Had the team followed his call to go to slicks from the start he could have enjoyed a Haas-esque leap through the field, so will be frustrated that it did not quite play into his hands.

Lost a number of places from the start and never was able to recover in a McLaren that was lacking pace. Beat Sainz in qualifying but never looked in contention for points after lap one.

Very quiet race for the Frenchman who has not lived up to my expectations since returning to Formula 1. Lost out to his teammate again in qualifying and although the Renault was not that fast all weekend, he underwhelmed.

Better in the race than he was in qualifying once again, the Finn is battling with what looks like a very slow car, especially on Saturday. Beat Romain Grosjean despite his early running near the front, but never looked like moving up any further.

Given a golden opportunity but just did not execute in the same was as his teammate. That Haas is not fast but nonetheless he could have done better than sixth given the initial boost he received as a result of tyre strategy.

Another disappointing race for Giovinazzi who just does not have the race pace of his teammate. Another anonymous run for the Alfa Romeo team, who are really struggling.

Another brilliant run in qualifying but that car is just not fast enough in race trim. Comprehensively ahead of Nicholas Latifi all weekend and just needs the tools to show off his talent more regularly.

Good job on getting into Q2, but still way off his teammate. Earned a deserved penalty before spinning and finishing five laps adrift. Needs to do better.

Another excellent performance to make it into Q3 but suffered another setback due to something entirely outside his control. Bad lack for a driver who doing a great job.