Magnussen: The team made an amazing call 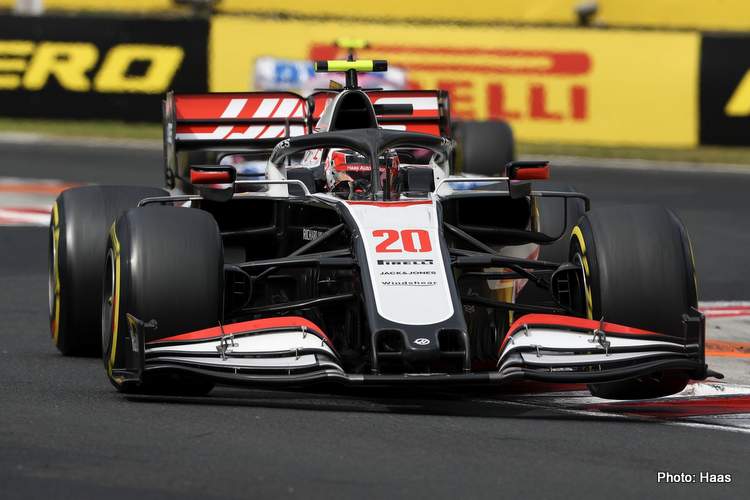 Amid the gloom of an uncertain future coupled below-par performances, the Hungarian Grand Prix proved to be a good race for Haas when a ‘light-bulb’ moment on the pit wall resulted in much welcome points for the American team.

Kevin Magnussen surprised all by opting for full rain tyres at the start of the race in Budapest, but at the end of the formation lap, the Haas pair darted into the pits and sets of dry mediums were bolted on, which meant a pitlane start for both cars.

When they were released it became clear that it had been an inspired choice as the rest of the grid were on intermediates just as the track started to dry rapidly. By the end of lap one others were relinquishing track position and following suit by changing to slicks.

The timing screens soon showed the Haas duo at the sharp end thanks to the early call; thereafter it was an afternoon of defence for the drivers with Magnussen wrestling to ninth and Grosjean in 15th.

Magnussen was clearly delighted with the points and reported afterwards, “I’m so happy. The team made an amazing call before the beginning of the race – on the formation lap, to call for the slicks.

“It was really strong for them to give me that trust, to put me out on dry tires and in conditions that weren’t easy. It was pretty risky, but it worked out. The pace was there and having started from the pit lane, after a few laps I was in P3.

“I knew that wouldn’t be our final placing, but it was amazing to be up there in the race. I just tried to hang on to it as much as I could. I kept working with the team regarding where realistically we were going to be. In the end it was P9 – I held on to it and we had opened the gap to a Ferrari and then kept the McLaren away as well.

“It shows what a good car we had in the race. It’s proved that the team has done an amazing job even though we’ve been struggling a little bit in qualifying,” added the Dane.

Grosjean added, “It was a good move from the team. I had radioed and said it was too dry for the inters, so we took the gamble. The first few laps were a bit hairy but after that things worked really well. The pace was good. I started to have graining on the front left tire, we hadn’t protected it enough.

BUt invariably the Frenchman was involved in an incident with Red Bull’s Alex Albon, “It was going okay, then sadly – and I need to review it, Albon had quite a late move on me at turn one, he hit my front wing and damaged it. I had much less performance in the car after that. We tried but things went out of sync after that, we just couldn’t stay in the points.”

Team chief Guenther Steiner summed up his team’s afternoon at Hungaroring, “It was a great result for the team today finishing ninth and bringing some points home. It’s fantastic, as at the moment we’re not in a position to do this under normal circumstances.

“The call at the beginning of the race was the decision which made this happen, the guys then just kept it up. Kevin did a fantastic job in the race, Romain just had a few issues with the tires.

“Thanks to the whole team for putting in the hard work and keeping on pushing – they never gave up; we never give up,” exalted the team chief.