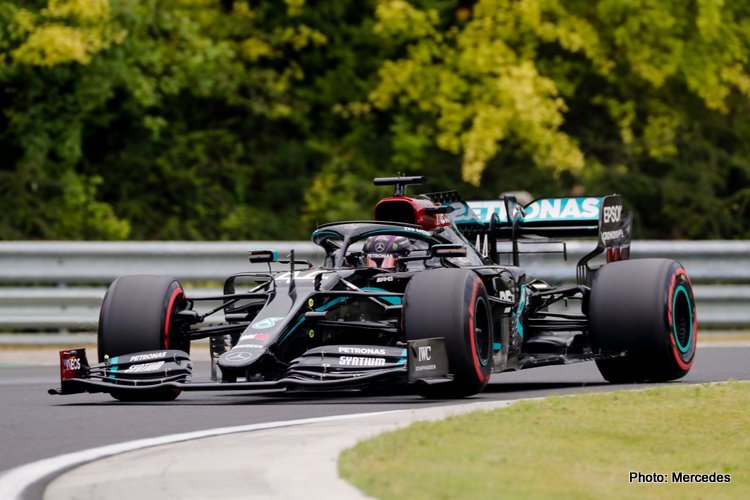 Taking his 90th pole position in Formula 1, Lewis Hamilton led the way on what was a banner day for Mercedes-designed cars Saturday in Hungary.

Setting a best time of 1:13.447, Hamilton 90th pole extends his own record to 22 over next-best Michael Schumacher.

And while he certainly stands alone in the record books, teammate Valtteri Bottas ran him close on-track, the Briton’s advantage only secured by a 0.107 second margin on his final lap.

Hamilton said afterwards, “I just have to pinch myself, it doesn’t register. It’s quite humbling to be honest because I get to work with an incredible group of people, who without I wouldn’t have the opportunity to do so. So massively thankful to everyone back home and everyone here who does such an amazing job.

“Valtteri doesn’t make it easy for me at all so it requires absolute perfection when doing laps and qualifying like that is one of the things I enjoy most. It was really nicely hooked up today, and not far off the rails,”  added the World Champion.

Bottas reduced the deficit from three tenths after the first Q3 run, but again fell short. The Finn reported, “I saw in P3 it was going to be a close battle with Lewis at least and, as a team, we were again on a really strong level and apart from other teams, which is good for us,

“At the end my Q3 lap was really good but in the end I couldn’t really go faster. Lewis did a great job today to get the pole, as always, and it’s going to be a bit of a drag race into Turn One so I look forward to that,” added the Mercedes driver

Additionally, the two Black Arrows made it clear they stand alone at the front of the grid, with the next-best efforts of Lance Stroll and Sergio Perez 0.930s and 1.098s behind Hamilton respectively; a top-four lockout for the tri-star badged PUs.

Stroll was upbeat with his third-place effort, “Really great job by all the guys and I’m really pleased with the session. Now sights set on tomorrow and I’ll try and grab some big points.

“It was a gamble [to stay on softs in Q2], there’s no doubt/ But that’s going to be put us in a good position. I’m really happy to get through on the mediums and my lap at the end really felt like it was spot on. It always feels great when you put it all together at the end of qualifying,” concluded the Canadian.

Fifth and sixth were the Ferraris of Sebastian Vettel and Charles Leclerc, providing a boon for the struggling team in general and the soon-to-be-departing Vettel in particular.

Max Verstappen was seventh in a massively disappointing day for Red Bull, who came into the weekend with hopes of challenging Mercedes, but have been simply unable to produce an acceptable car for their drivers.

Lando Norris and Carlos Sainz finished P8 and P9 respectively, with the McLaren suffering a step-back in competitiveness relative to their performances in Hungary.

Rounding out the top-ten was Pierre Gasly, who despite not setting a time in Q3 has a legitimate claim to being the driver of the afternoon, having snuck his AlphaTauri into the final session despite an irreparable engine issue.

Moving back to Q2, Daniel Ricciardo would have been disappointed to just miss the cut, although George Russell would have been elated to be alongside him in 12th, matching his sterling effort from last week in Austria.

Alexander Albon was the biggest casualty of the day in P13, with the Thai lashing out afterwards on radio for his team dropping him into traffic.

Esteban Ocon and Nicholas Latifi ended 14th and 15th respectively, the latter showing a marked improvement on his first two qualifying sessions as a Formula 1 driver.

Kevin Magnussen was the last driver to miss the Q1 cut in 16th, ahead of AlphaTauri’s Daniil Kvyat and Haas teammate Romain Grosjean.

Rounding things out were the Alfa Romeos of Antonio Giovinazzi and Kimi Raikkonen, the Ferrari sister team clearly suffering the same drop in performance out of the midfield as the Scuderia have with the front-runners. 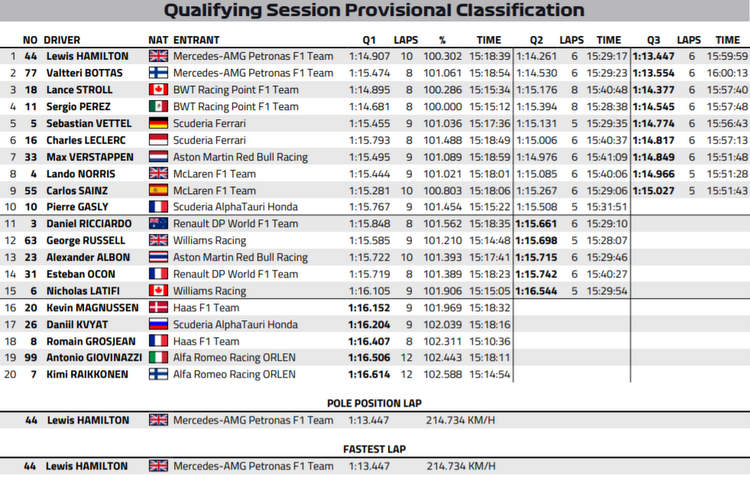