Inside Line: Time for Valtteri to raise his game ASAP 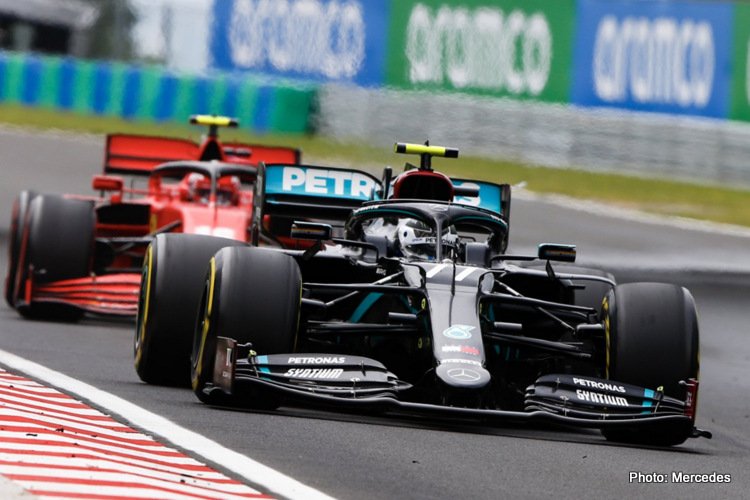 After finishing second to Lewis Hamilton at the 2020 Hungarian Grand Prix, Valtteri Bottas was brutally honest in his own assessment as he digested another trouncing by his Mercedes teammate.

A grim-faced Bottas emerged from his balaclava, knowing he had mucked up a race that was his to at least challenge for victory.

And said as much, “It was a pretty bad race from me to be honest. Starting second, obviously, we aim to win the race. But I lost it from the start, I reacted to a light on my dash that went off. I don’t know what it was. I lost many places and it made the race pretty difficult for me.”

When the season started three weeks ago, the Finn was fast out the blocks winning the season-opening Austrian Grand Prix and with it allowing F1 fans to believe that Hamilton will not simply gallop to the title unchallenged this year.

And, on current form, it’s a two-driver race as there is no team anywhere close to Mercedes. The advantage is probably a second in qualy trim to their chasing rivals, their race pace around that or more coupled to unrivalled reliability.

By his own admission, the W11 is the best car Hamilton has ever driven; one presumes Bottas feels the same as he drives an identical piece of kit every race weekend.

With this pretext, expectations are on him to at least take the fight to his teammate – granted a Nico Rosberg scenario is not what Merc want – but at least pressure the champ whenever possible.

The most recent ‘re-trouncing’ of Valtteri began eight days ago when Lewis pulverised everyone with the stunning lap to claim pole in the wet for the Styrian Grand Prix last weekend, and with it fired a warning shot at all his rivals.

Since then the six-time F1 World Champion has simply taken his game to the next level winning the Styrian Grand Prix comfortably and now dominating the race in Hungary.

Granted, Bottas also upped the ante and was only a tenth shy of pole yesterday in qualifying; normally it’s three tenths when Lewis is at his very best or six tenths when he deploys Hammertime.

So with the Mercedes way up front, at least we had the prospect of a battle between the black cars at the front of the field with Max Verstappen thrown in for good measure.

But Bottas put paid to that by confusing himself at the start and getting bogged down in midpack mayhem; thereafter he spent the rest of the race playing catch up while #44 disappeared into the distance.

The #77 car showed remarkable pace as it hunted down Verstappen but, when it eventually got within range, Max was wise to him and hung on to finish second, with Bottas third albeit nine seconds adrift of winner Hamilton who had a pitstop in hand. The gap might have been well over half a minute between teammates.

It was an honourably candid post-race self-analysis by the Finn, which prompts asking: Is Bottas content to be remembered as the best wingman F1 ever had?

Because that’s his reputation already and only raising his game with immediate effect, giving Lewis a hard time, will erase that growing perception.

Which begs the questions: Does Valterri have it in him to seriously challenge and beat Lewis on a regular basis? Is he good enough for that?

He’s in his fourth year as Hamilton’s partner and it would be fair to say he is no closer to matching the Briton now than he was back in 2017 when he joined the most potent team on earth.

Which suggests Mercedes are happy with the status-quo between their drivers, where a clear hierarchy remains, by design or not, with Hamilton doing the heavy lifting and getting the bulk of the rewards, with Bottas in the support role on all fronts.

After the race on Sunday, he explained the start gaffe, “I was looking at the start lights and the five lights went off and something the main page of the ash changed to different colours and I reacted. It was an odd situation.

“But if you end up on the podium it is great. A strong race on my side. A bad weekend. I need to gain some more points in Silverstone. After that, I focus on the race and tried to maximise the situation,” added Bottas.

Which ‘translated’ and summarised means: “I messed up the start…” or something to that avail. A mistake in other words.

As it stands, with Mercedes dominance at an all-time high, Valtteri would do us all a favour if he raised his game, at least made a contest out of what could well be a canter for Lewis in his quest for the seventh world title, which few doubt will be his come the end of the season.