Binotto: To be lapped is very painful for us and our fans 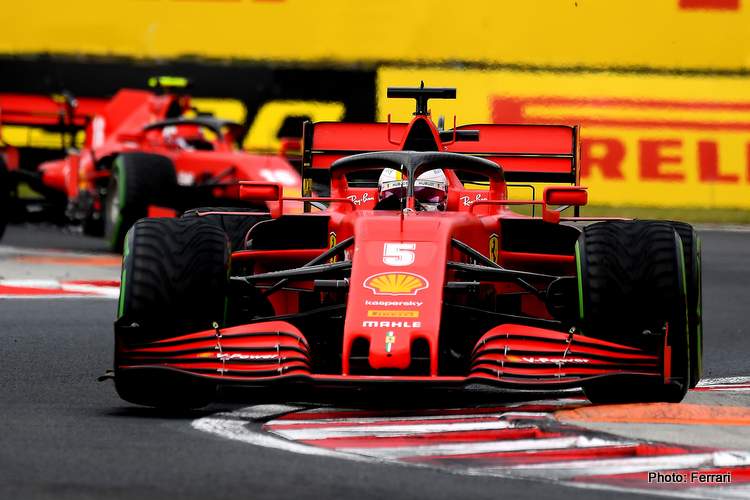 Ferrari’s Annus horribilis continued in Hungary, a few flashes of pace on Saturday did not translate into anything as Sebastian Vettel and Charles Leclerc were sent to battle with a pair of ineffective Prancing Horses.

In what was a painful race for Tifosi, Vettel was again his mistake-prone self yet managed to salvage sixth place, while teammate Charles Leclerc spent the afternoon defending the indefensible and slithered down to 11th in what must have been his most trying race in red.

To add insult to injury runaway race-1inner Lewis Hamilton lapped the hapless SF1000 of Vettel twice, the first time before he pitted and then again when he emerged with fresh rubber. It was a double humiliation served to the Scuderia on yet another forgettable afternoon for them.

The farce did not escape team boss Mattia Binotto, “An extremely disappointing Sunday and the result is very hard to swallow. In qualifying, we had got the most out of the car as it is at the moment, but in the race that was not the case. To be lapped is very painful for us and our fans.

The headline infused summary continued, “Now we return home after this very long trip and we have to try everything we can to improve as much as possible in every area.

“Everyone will have to analyse their work and have the courage to change course if necessary, because the current dynamic is unacceptable. There is no other solution to fix this situation.”

The Reds leave Hungary fifth in the constructors’ standings with 25 points, Mercedes top the table with 121.

Vettel was victim of a long stop which cost him almost ten seconds in total, “I lost a lot of time, having to let other cars come down pit lane before I could be released. But in the end, fifth or sixth was the most we could have done.

“Towards the end, I was struggling with the tyres and even if I would have loved to have put up more of a fight, there wasn’t much I could do to keep Alex (Albon) behind me. We are not where we want to be just now, but at least we did everything we could today,” added the four-time F1 World Champion.

Teammate Leclerc was somewhat bewildered by the car he climbed into on race day, compared to the one he used in qualifying suggesting some serious problems need sorting at the factory before Silverstone in two weeks time.

“It was a very complicated race,” summed up Leclerc in his review. “I’m not sure what happened, because we didn’t make changes to the car, but it was extremely hard to drive, as the balance was so much worse than Friday and Saturday, when it was actually better than expected. It just didn’t feel like the same car.

“We need to look further into that to try and understand, as I was struggling a lot. We stopped for Softs a bit earlier than others and maybe it was a bit too optimistic.

“But it was a good call and I managed a few quick laps, but there was only one dry line so I could not overtake and, with hindsight, the Soft was not the best choice. After that we were just slow. There’s a lot of work ahead of us,” Leclerc added stating the obvious.