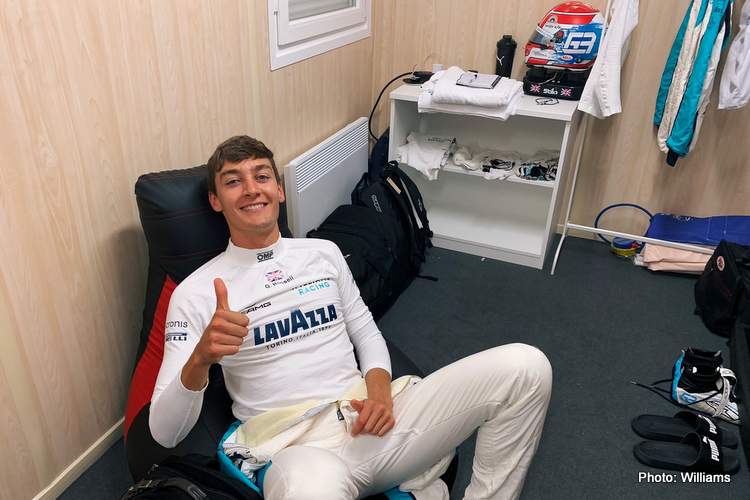 It was a big day for Williams, two cars in the top fifteen after more than two years of being nowhere every Saturday, the Grove outfit came good in qualifying for the 2020 HUngarian Grand Prix.

There has been an obvious and huge improvement in their car since the last time they visited Hungaroring in 2019, so much so that enabled George Russell to qualify 12th for Sunday’s race, unthinkable not too long ago.

Newcomer Nicholas Latifi also gave a good account of himself and will line up 15th, but his teammate all but stole the show with a grand performance that will see his shares soar.

At one point Russell’s name popped up to third on the timing screens, a real stellar lap-time not an anomaly, and he only missed out on Q1 by a couple of tenths. A week ago he did the same thing, these are no flukes.

He said afterwards, “The car came alive in qualifying in these cooler conditions and I had a lot of fun out there. Again, I did not expect to be this fast, the car was feeling great and I had a good rhythm.

“It was a shame about the Q2 lap, we had some traffic and I think Q3 was possible today, which would have been amazing. But P12, considering where we were last year, was incredible.

“I love driving this track flat out, it was great fun and I’m proud of the boys and girls to get that result again. Fingers crossed we get a bit of rain tomorrow; we could do with that and we could be on for a good result.

“I am ready to fight, and hopefully we have a successful race,” added the 22-year-old who is the obvious solution for whatever problem Mercedes may have had regarding a successor for Lewis Hamilton or Valtteri Bottas…

In the sister car, Latifi has looked sharp all weekend at the venue he does not particularly like, but knows from his F2 days.

The Candian summed up, I am definitely very pleased; it was my first time into Q2. From a team point of view, it needs to be acknowledged all the amazing work that they have done.

“I am still a bit disappointed in myself that I wasn’t further up, as I expected a bit more. However, I can be very pleased with the overall session and a big well done to the guys,” added the rookie.

And big kudos to those “guys” which has to include everyone from Claire Williams, the Grove factory, their partners and of course their drivers.

The turnaround has been remarkable, and fans of the once mightiest team will be hoping that the trajectory of good fortune is now firmly upwardly mobile, with young and very capable George leading the charge and winning many fans along the way.