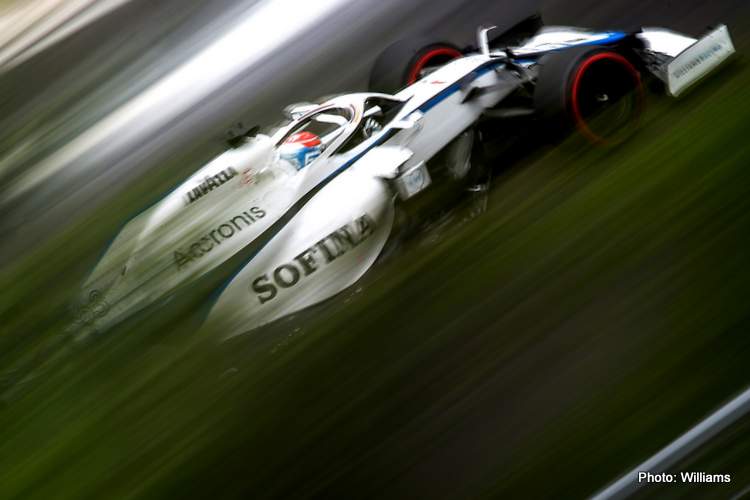 Qualifying ahead of each Grand Prix is a key moment of a race weekend, particularly that 10 minutes Q3 spell, where much is revealed, that final all-or-nothing push where drivers set the fastest times they will set all weekend, with their cars maxed-out, unless it’s wet of course.

When quail conditions are similar to the previous year, the exercise of comparing Q3 times takes on significant meaning as it serves as a simple yet effective barometer of progress.

Our intrepid Reader !!!!KartCMP1 [Thank You] provides us each race with this comparison chart into which we can extract a pecking order of sorts, in terms of outright pace and firepower coupled to each driver’s effort. 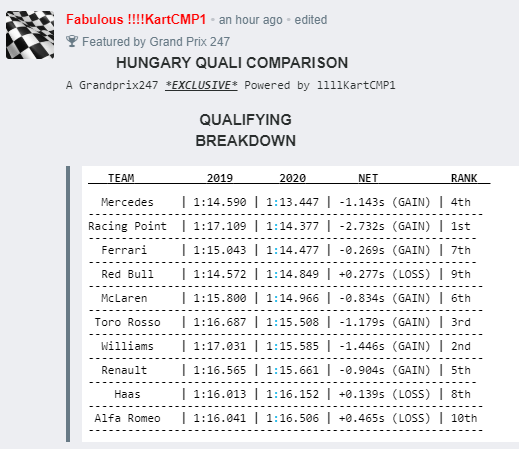 At the end of qualifying for the 2020 Hungarian Grand Prix, looking at the above analysis it is clear that Racing Point have found a mammoth 2.7 seconds with their Mercedes W10 in pink.

And with the handy piece of kit, which so resembles last year’s world champion car, Lance Stroll and Sergio Perez own row two of the grid for Sunday’s race. What a difference a year makes, one could add.

Williams, another Merc-powered outfit, have transformed their package substantially, no longer perennial back of the grid contenders, they picked up an impressive 1.4 seconds and George Russell nearly wrestled it into Q3, but had to settle for 12th.

Nevertheless another huge performance by Russell who has F1 World Champion written all over him. Teammate Nicholas Latifi was not too shabby either and will start the race from 15th.

Biggest losers in the field are Alfa Romeo who have lost over four-tenths of a second relative to their last visit to Hungaroring, with fellow Ferrari-powered Haas who also went backwards, over tad over a tenth down on a year ago.

Ferrari themselves enjoyed a gain of a 0.269 of a second, which is no match for the big improvers shown on this table, They are still a second shy on the benchmark time set by Mercedes, notably last year the deficit was only four-tenths.

The biggest eye-opener of all is the fall of Honda-powered Red Bull. Both their divers struggling with numerous issues as they overdrive Adrian Newey’s finicky creation while horsepower is sorely missed.

Max Verstappen was on pole last year, this time around he will start seventh, this time he was a quarter second shy while Alex Albon was nowhere thanks to a strategy gaffe that sent him straight into a traffic jam for his final flyer.

But he knows he has to up his game, and this session will have done his confidence no good at all as he grapples with a car that even his teammate cannot take to the prize-fight.

Pre-season hype was Red Bull and Max will take the fight to Mercedes. But it has not transpired, begging the questions: Is it a Honda problem or an aero problem or a combination?

Trying to blame their Japanese partner does not work, as the maths does not tally because the same power units on the AlphaTauri have not slowed them down, in fact, they found an extra second according to our calculations.

Suggesting an aero problem with the Red Bull package their legendary designer Adrian Newey and his team have concocted. The RB16 probably has a rocket ship concealed under the skin, but someone needs to set it free to do some damage, sooner rather than later.

The Renault brigade have improved, with the works team impressively finding nearly a second since the last race in Hungary, and McLaren up by eight tenths. But still the 1.5 to 2.1 seconds deficit to the leading Mercs does not make for good reading.

Zak Brown and his team will be relishing the prospect of their return to the Mercedes fold, especially on current form as tri-star badged cars hog the top four positions on the grid, all six of them in the top 15 this afternoon. Enough said!