After conceding the top-spot to Ferrari in FP2, Valtteri Bottas and Mercedes returned to the front with another 1-2 in final practice in Hungary on Saturday.

Setting the pace with a time of 1:15.437, Bottas was 0.042 seconds clear of teammate Lewis Hamilton, as the pair used the return to normal conditions after Friday’s wet FP2 to reinforce the notion they remain the team to beat.

That said, their advantage was significantly diminished from FP1, with Racing Point’s Sergio Perez just 0.161s behind, the Mexican emphasizing just why his ‘Pink Mercedes’ is under protest.

Ferrari’s Charles Leclerc was a further 0.183s back, indicating Ferrari might have made real progress with their upgrades, while Lance Stroll was fifth fastest, four-tenths down on teammate Perez.

Red Bull’s Max Verstappen was sixth in what he will probably deem an unsatisfying session for the team, with a massive spin at turn 12 exemplifying the struggles he had with the balance of his car.

Lando Norris was seventh for McLaren, ahead of Sebastian Vettel, who was the last of the runners within a second of the top time.

Pierre Gasly, getting his first dry running of the weekend, managed a P9 finish, while Daniel Ricciardo had to settle for 10th after having his fastest lap deleted for exceeding track limits.

Carlos Sainz was 11th with a time of 1:16.545, 0.037s ahead of Alexander Albon, who has been even less satisfied with his Red Bull than teammate Verstappen so far this weekend.

Renault’s Esteban Ocon was P13, with William’s George Russell immediately behind him in an effort that bodes well for his chances of making Q2 for the second race running.

Alfa Romeo’s Antonio Giovinazzi and Kimi Raikkonen, both around the top ten in FP2, got a severe reality check here in their 18th and 19th placed finishes.

20th and last was rookie Nicholas Latifi, 0.123s behind Raikkonen in his Williams. 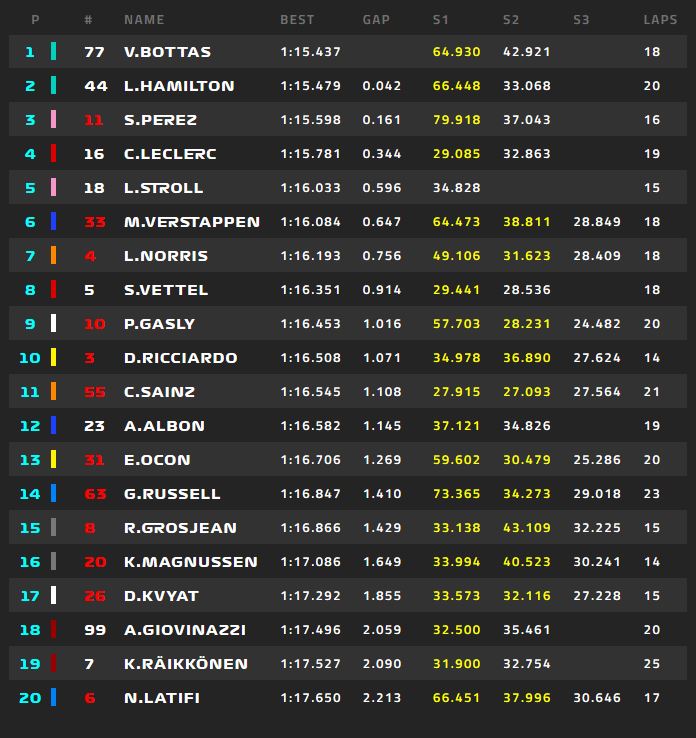