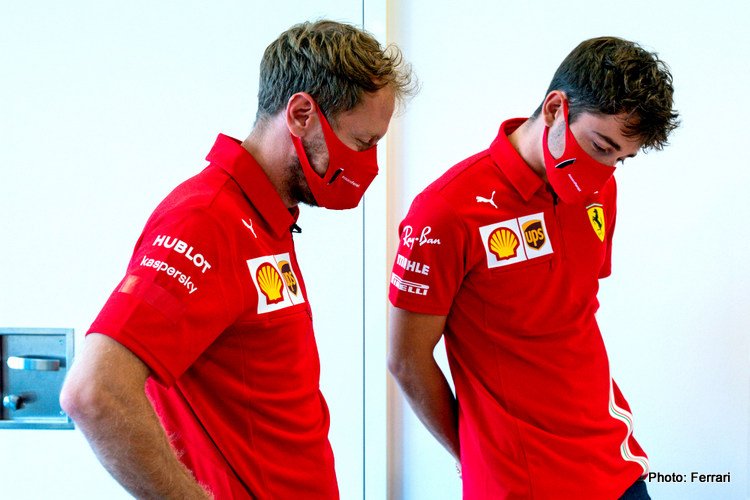 Ferrari’s Sebastian Vettel and Charles Leclerc say their collision at the Styrian Grand Prix has been put in the past, but admit there isn’t much optimism for the immediate future.

Ferrari, last year’s Formula 1 runners-up, are fifth overall after two races in which they rode their luck and then lost it.

Leclerc was a fortunate second in the Austrian opener, despite the car lacking straight-line speed, but the pair’s first-lap collision in the second race ended their involvement after about 20 seconds.

Leclerc immediately accepted it had been his fault.

“I think we’ve put it behind us,” Leclerc told a video news conference ahead of Sunday’s Hungarian Grand Prix. “I directly went to talk to Seb after the race to excuse myself. I think he accepted that.

“On my side, I will focus on this weekend and trying to achieve the best result possible.”

Vettel, sitting at a safely spaced distance with both wearing face masks as part of measures against COVID-19, said there was not much to add.

“These things are the worst that can happen, obviously if two cars of the same colour come together it’s something we always try to avoid.

“But you are racing and this stuff unfortunately was part of it. We spoke about it, it’s behind us and a couple of days later we have a chance to do better here in Hungary.”

Ferrari have upgrades for the race on both cars but Leclerc said there was still a lot to do.

Asked whether Ferrari had slipped out of the lead pack and into the midfield, the Monegasque accepted the sport’s oldest and most successful team were not likely to win anything just yet.

“I think realistically we are struggling with the performance at the moment so I don’t think we can consider us as fighting for podiums at the moment,” he said. “But we will try to change that.”