Ricciardo: The car has taken a step forward 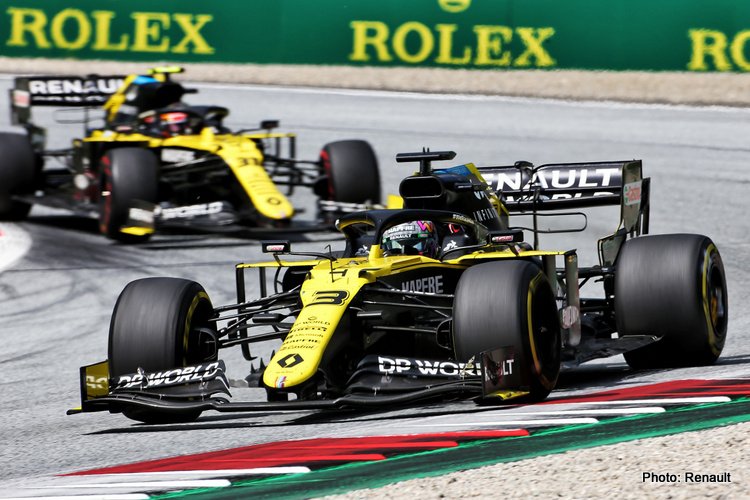 Renault driver Daniel Ricciardo believes that the R.S.20 is a step forward from its predecessor that he drove during the 2019 Formula 1 season.

The Enstone outfit endured a difficult 2019 , finishing fifth in the constructor’s championship and behind their customer team McLaren.

As a result of their struggles Ricciardo decided to join McLaren from the start of the 2021 season, but the Australian insists that his current team have made progress since last year.

“There have certainly been positives,” he said, before giving an example from last Sunday’s Styrian Grand Prix.

“If I take the first half of the race, I know I was on the medium and the cars in front were on softs, but I think I was quite close to the pace of Sainz and Albon, so I think we have improved, especially on a circuit which hasn’t been a good one for us.

“I’m certainly curious to see how we can get on at the next few. Silverstone was good for us last year, so we will see once we get there, but there are positives to take. Moving forward we have just got to understand a little more about the soft [tyre]. The guys on the medium at the end were quite a bit quicker, so I feel we can do better, but generally speaking, the car has certainly taken a step forward, that’s for sure.”

Renault have failed to pick up a point at the Red Bull Ring since it returned to the calendar in 2014, so the team will have been please to have picked up two eighth-place finishes from the opening two rounds.

However, reliability problems continued to limit their progress, with Ricciardo and his teammate Esteban Ocon suffering a retirement in the Austrian and Styrian Grands Prix respectively.

“In race trim, we’ve still got a little bit to improve,” Ricciardo added.

“But generally we can follow other cars a little better in a race, and suffer a little bit less in the dirty air, so the downforce and package we have are a bit more efficient. On low fuel, the rear of the car has improved a lot, so traction. If we look at overlays from last year, we are getting to full throttle considerably earlier, so the rear of the car, at the moment, is a strength compared to this time last year.”