Ferrari: Both men are keen to put it all behind them 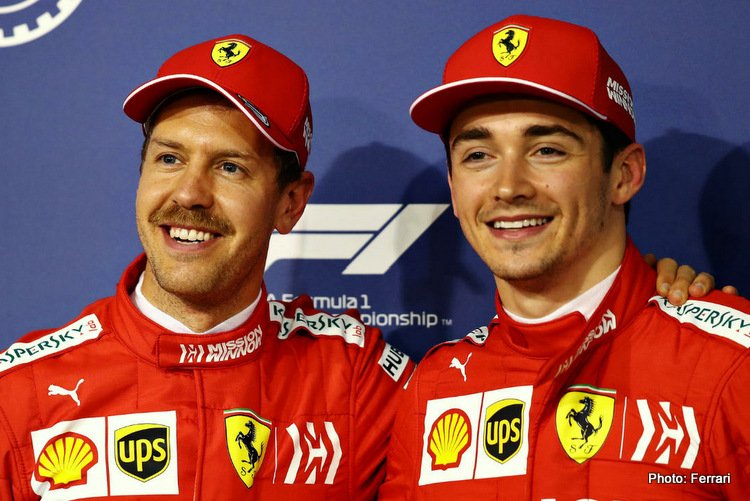 Ferrari are in crisis, their most recent performance (forget the crash) at the Styrian Grand Prix suggests they are no longer in the Top Three and actually reduced to the irrelevance of midpack mayhem where it is clear neither of their drivers are comfortable.

This was cruelly exposed to the world when Charles Leclerc’s, sim racing style, lunge eliminated both him and his teammate before the first lap was run in Austria.

The pain since then has been deep and the embarrassment acute for all at Maranello whose much vaunted, albeit rushed, updates to the finicky SF1000 were a flop at Red Bull Ring.

If the Scuderia cannot orchestrate a dramatic turnaround and recovery, starting at Hungaroring this weekend, it would be safe to assume their season can be written-off.

Again Mercedes are their mighty dominant selves, Red Bull are there or thereabout, and the chasing pack are faster than ever; the Reds are sinking.

Needless to say the mounting pressure has made Mattia Binotto’s hot-seat at the helm even hotter, his future already being speculated upon in Italy.

Previewing the forthcoming Hungarian Grand Prix – where a turnaround is demanded from Tifosi and increasingly hostile Italian Media – this is what the team, their boss and their drivers had to say ahead of Budapest:

Sunday sees the 35th edition of the Hungarian Grand Prix which normally signals the start of the summer break. But this year, just one week on and it will be time for another triple header in this unusual season, with two races in the UK followed by one in Spain.

Last week was far from perfect. The team got down to analysing data from the Austrian Grand Prix and assessing the aerodynamic updates that had been rushed to the track in record time to be ready for a first run during Friday free practice for the Styrian Grand Prix, to be held at the same track.

The three hours of free practice were used to compare different configurations of the SF1000 and to gather as much data as possible to analyse carefully to see how the new components were working. With FP3 a washout, further comparison work was impossible on Saturday morning and with the race over for both cars almost immediately after the start, things were about as bad as they could get.

The work of studying the data continues and the team has worked on a programme for Hungary that will allow for a greater understanding of the SF1000 on a slow track, with very different characteristics to the one in Austria.

The Hungarian Grand Prix has always been held at the Hungaroring, on the outskirts of Budapest, but has never been the third round in any season since it was first inked into the calendar over three decades ago.

The track has undergone a few modifications and Scuderia Ferrari has won here seven times, the first courtesy of Nigel Mansell in 1989, when the Englishman came back from 12th on the grid, overtaking Ayrton Senna when the Brazilian hesitated before lapping Stefan Johansson in the Onyx.

Behind the Iron Curtain. The race first appeared on the calendar in 1986 when the idea of holding a race behind the iron curtain while the cold war was still real, caused quite a stir, especially in the wake of the boycott and counter-boycott of the 1980 Moscow Olympics and those in Los Angeles in 1984. But the gamble paid off and its been a fixture on the calendar ever since.

The circuit. The track isn’t used much and its rural setting means it’s usually pretty dirty on Friday. The Hungaroring is 4.381 kilometres long and has 14 corners, 8 right and 6 left. The start-finish line is on the longest straight which provides overtaking opportunities into turn 1, a downhill right-hander.

After a few hundred metres, turn 2 is also downhill, but to the left and leads immediately into turn 3, again downhill. Next is another fast section, climbing up to turn 4 to the left. Then it gets twisty, with a slow chicane and two final hairpins, turn 13 to the left and a final right hander onto the straight.

Redemption. After Charles Leclerc and Sebastian Vettel collided at Turn 3 on the opening lap of the Styrian Grand Prix, both men are keen to get back on track to put it all behind them and work with the team to try and improve the performance of the SF1000.

Mattia Binotto, Team Principal: “Hungary brings the curtain down on the first triple-header in this very compressed season. The Hungaroring is a very different track to Spielberg in Austria, which hosted the first two races.

“It will be interesting therefore to see how the cars behave on a track that requires maximum aerodynamic downforce. Given that overtaking in Hungary, unlike Austria, is usually a rare occurrence, it means that tyre management over a single lap and being well prepared for qualifying will be of vital importance.

“We know that the performance level of our car has not matched our expectations, nor that of our fans, but we are working flat out on every area to improve as quickly as possible.

“Our aim this weekend is simple and straightforward: to score as many points as possible. To do that, we must work perfectly in every area, from the drivers, to car preparation to how we operate on track, to reliability.”

Sebastian Vettel: “After the poor showing last weekend in Spielberg it’s good that I can get straight back on track. The Hungaroring is quite a physically demanding circuit for the driver, because with hardly any straights.

“In fact there are so many corners and usually, the Grand Prix is held at a very hot time of year.
It’s also a track that attracts a lot of Ferrari fans and supporters from Germany too, so it will be very strange racing without seeing them cheering in the grandstands.”

Charles Leclerc: “I’m really looking forward to being back in the car. I like the Hungaroring, which is a very technical circuit, featuring several tricky areas where you pay for the slightest mistake with lap time. That’s why, especially in qualifying, you have to put together the perfect lap.

“Budapest is one of my favourite stops on the calendar, because the city is so beautiful and we usually meet lots of enthusiastic fans there. It will be a bit different this time and we will do our best to put on a good show for them.”