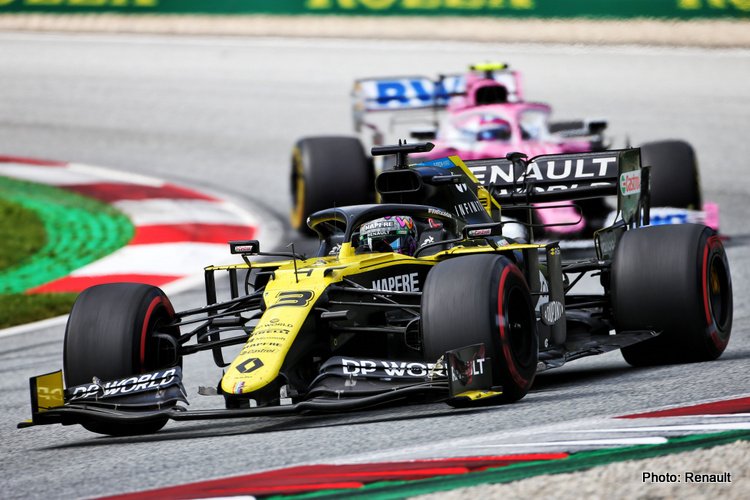 Lance Stroll’s controversial pass on Daniel Ricciardo in Sunday’s Styrian Grand Prix was symptomatic of a loss of composure, according to the Australian.

A move that allowed the Racing Point driver to move up to sixth with two laps remaining, Stroll made an awkward attempt to take Ricciardo down the inside of turn 3, forcing both drivers off track before the former accelerated away from his midfield rival.

Afterwards the stewards decided to take no further action, although Ricciardo suggested it was only his evasive maneuvers that stopped the two from colliding.

“He didn’t really get past, he forced both of us off the track,” he said in his post-race interview prior to the stewards’ announcement. “I’ll be critical of myself – I should have closed the door – but I don’t think he was ever making the move. So I think it was desperate.

“Obviously Lando [Norris] was coming, and I think he had to do something or Lando would eat him up. But I take the apex and we crash. Just a frustrating end.”

In the end Norris managed to get past Stroll anyway, but the Canadian denied any wrongdoing.

“I spent the whole second stint trying to get a good run on him but he was very strong into Turn 1 and out of Turn 1 and that made it very challenging for me to get by.

“Finally into the [penultimate] lap I saw an opportunity. There was a very small gap and I went for it, you know, and it turned out to be a very hectic last lap but a very exciting race for everyone.”

Finishing eighth as a result, Ricciardo said in his team comments to Renault that he had been hard done by, but also acknowledged he was happy just to score points amidst the team’s continued reliability problems.

“I felt if I turned in, we would have crashed, so I had to make that call. I maybe should have blocked him and it’s a shame to lose a couple of positions from that one moment.

“The overriding feeling is frustration, but we’re up and running for the season now.”