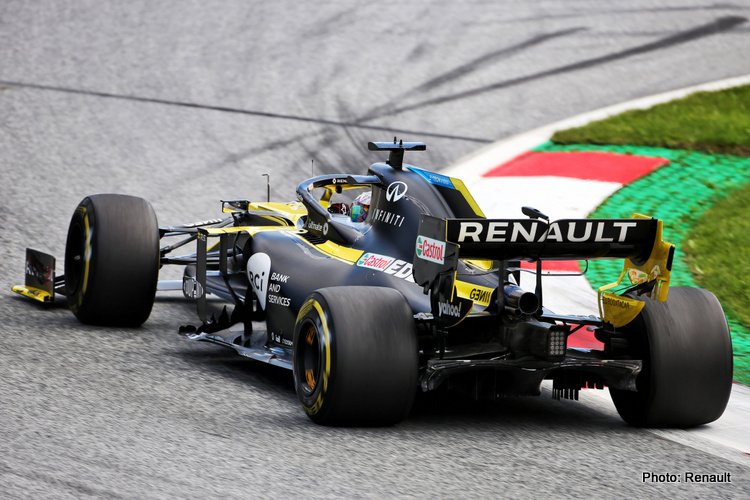 Renault has blamed a radiator issue for one of its cars retiring from both of the opening two races of the 2020 Formula 1 season.

Daniel Ricciardo was forced to return to the garage early during the Austrian Grand Prix last weekend, with teammate Esteban Ocon suffering the same fate on Sunday at the Styrian Grand Prix.

After the race the team admitted that both drivers suffered an identical issue relating to a radiator weld that became overheated.

“It’s a part that we get from a supplier. To get into detail, it’s a weld on the radiator. We’ve inspected all the welds, we haven’t found any issue. And we had the same exact problem.

“And we used the same radiators in Barcelona pre-season testing, and we had no issues whatsoever. So whether it’s the kind of thermal duty cycle of the circuit, whether it’s the famous kerbs of Spielberg, there’s something we didn’t understand, or we didn’t manage to spot.

“So we’re going to take stronger containment measures for the next race, but we’re extremely disappointed that that we had the same problem twice and we lost two point-scoring opportunities with each driver. So we are going to look at it very, very hard again, so all the radiators are on the way again, back to Enstone to be checked.”

Despite the fast turnaround between the race this weekend in Austria and arriving in Hungary, the team are hopeful they can find a solution to the problem.

“We can’t do new ones, so we’re going to have to do what we call containment on the existing ones,” he added.

“We’re going to have to add some material and try to reinforce the weld and try to make it less prone to breaking or to leaking. So it’s not going to be pretty, but hopefully it will be good enough for one race, and we will look at something more robust and in the future.”

Both drivers have earned one eighth place finish from the first two races of the season and Ricciardo reaffirmed that the issue would need to be looked into.

“I didn’t have any cooling issues or warnings today,” Ricciardo said after the Styrian Grand Prix.

“So it seems like it’s the reverse of last week, Esteban had no issues, I did. And today he had the issues, and I didn’t, so I didn’t have to take care of anything on cooling today. So mine was fine. But it seems like a very similar issue that he’s had today. So that’s, that’s obviously something that needs further investigation.”

“I’m obviously disappointed for sure with what happened,” Ocon added.

“We were running on a good position, we were having a great opportunity. I think the strategy was also quite nice. So it’s a shame. Unfortunately, it’s motorsport. We suspected it was a cooling issue. So we retired to save the engine, in case that was that the thing.”