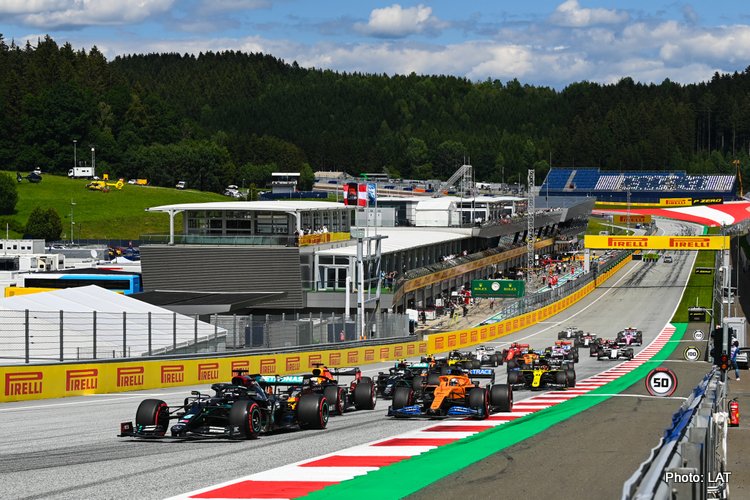 The second race of the 2020 Formula 1 season may not have delivered quite the same drama as a week prior but the Styrian Grand Prix was certainly an absorbing affair.

Following an out of this world performance in a wet qualifying session on Saturday, Hamilton led from the outset to secure his 85th career win, with Valtteri Bottas and Max Verstappen involved in an engrossing battle for second place behind him.

Here, we look at how each of the 20 drivers rated.

A brilliant weekend from the six-time champion. He was excellent in the race and never looked at threat from those behind, but it was his Q3 performance that saw him 1.2 seconds clear of the field which really underlines why he is one of the best drivers Formula 1 has ever seen.

Came second after starting fourth on the grid but he was simply off the pace of his teammate. Took far too long to get past Carlos Sainz and Verstappen and was slightly embarrassed by his teammate on Saturday.

Tough to say what he could have done better both on Saturday and Sunday. Did really well to hold Bottas behind him for so long and produced a brilliant move around the outside to hold off the inevitable for another lap.

Really poor from Albon this weekend and the first time genuine questions will begin to be asked about his ability. Was 11 seconds adrift of Verstappen at the end, even after his teammate took a second pit stop, and was lucky not to be passed by Sergio Perez, who had started 17th on the grid.

Probably a more impressive drive than last weekend given his starting position. Out-raced his teammate Sainz after the Spaniard qualified on the second row, before taking the opportunities that arose late in the race to achieve a hugely commendable fifth place.

Loses a mark for his really poor performance in qualifying, but Perez more than made up for his error in the race. Cut through the field efficiently and quickly and was unlucky to tag Albon and slip back to sixth when fourth was definitely on.

A performance that reminds us that he does have some talent, Stroll managed to gain five places to take his first points of the season. The Canadian still under-performed in qualifying and was passed easily by Perez, but he cannot be too upset with this result.

A race of two halves for Ricciardo, who looked strong on the mediums before fading on the soft tyres in his second stint. Will feel aggrieved at the move Stroll pulled on him that lost him two positions, but will also be happy to get on the board.

Went backwards after starting third and was out-foxed by his teammate Norris, which is not a good look for the man headed to Ferrari. However, a slow pit stop did compromise his race and he certainly showed good speed to get ahead of Bottas in qualifying.

Made his strategy work from 14th on the grid where his teammate’s did not, this was a timely reminder of Kvyat’s qualities as a racing driver. Was definitely helped in his quest by a certain red team, but nonetheless a good showing.

A pretty woeful weekend for Alfa Romeo in which Raikkonen just missed out on the points after a pretty consistent race from the Finn. Cannot really be expected to do more until things improve.

Very under the radar from the Dane, but given Haas’ performance right now 12th feels like a win. Did well to make Q2 and probably maximised his race potential.

Like his teammate, Grosjean will be pleased to finish relatively close to the points after a pit lane start. Beat an Alfa and an Alpha Tauri, but the team has a way to go.

More mistakes in qualifying put him on the back foot once again and things did not get too much better in the race. Can be quick but simply crashes too often.

Another good qualifying performance from the Frenchman where he made Q3 and at one stage looked like he may start even higher than eighth. However, a bad strategy saw him fall back rapidly in the race.

Performed brilliantly to finish 12th in qualifying and start the race on the sixth row, but Russell will be bitterly disappointed to have run off the track during battle. Had a real chance to dice with the rest of the midfield for once and didn’t take it. Nonetheless, he looks a very exciting talent.

Unlucky in qualifying after Giovinazzi went off and may have even had his eye on a spot in Q2. In the race though he was slower than Russell and finished last on the road once again.

Excellent on Saturday to start the race in fifth and just two tenths behind Bottas. However, Ocon was definitely on the back foot in the battle with Ricciardo before being forced to retire.

Really bad weekend for the Monegasque driver who failed to make Q3 and then clashed with his teammate at turn 3 on the first lap. The incident was definitely his fault, although he was gracious enough to apologise.

Not bad from the German who out-qualified his much fancied teammate and made it to Q3 where others did not. Had no chance of avoiding the incident and will likely be feeling very fed up with life at Ferrari.