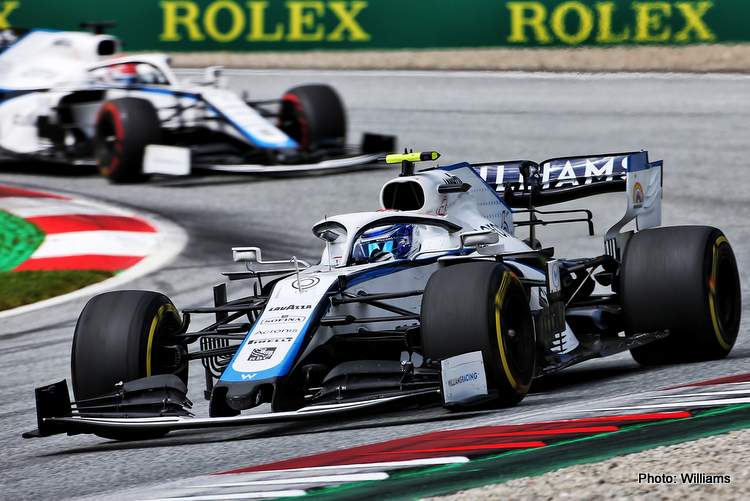 Williams report from the Styrian Grand Prix, Round 2 of the 2020 Formula 1 World Championship at Red Bull Ring.

Dave Robson, Head of Vehicle Performance: “It was a tough day today. We knew that we had outperformed the car yesterday with George and we were prepared to be defensive, but we didn’t think that today would be quite so tough. On a positive note, we got both cars home and we made some clear improvements to the car from last weekend.

“Our drivers were able to race each other cleanly, and the opportunity to race at the same venue in cooler conditions was very valuable for Nicholas’s understanding of the Pirelli tyres.

“We need to go through everything again in the next couple of days and see where we can find some extra pace for next week in Hungary. There were some good things from this weekend but overall it is clear that the car needs improving in all areas.

George Russell: “Firstly, I need to say sorry to the team. I completely messed it up in the early stage of the race. I made a good start and maintained the position and was trying to hold it on the outside of Turn 6 and just completely lost it. There was no grip out there and I need to say my apologies to the team. Who knows what today could have been, but I’ll bounce back next week.”

Nicholas Latifi: “It was a tough one, but overall, I thought I did a much better job in terms of the driving and I felt more comfortable behind the wheel. Today I had to fight a few cars, most of the fighting was with George, but that was nice to experience a bit of that consistently.

“We were lacking more pace than we thought coming into the race, so it was a shame we couldn’t fight more. We have some homework to do, but we still learned a lot which is the main thing.”