Red Bull: Frustrating to not have the pace to challenge 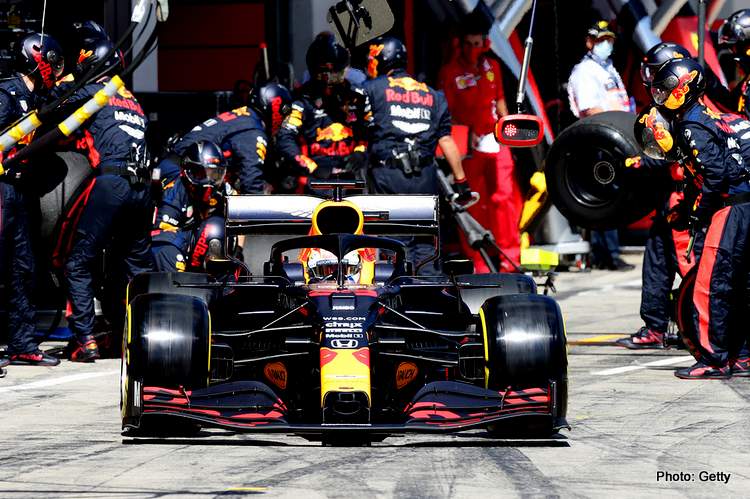 Max Verstappen took the Red Bull’s first podium of the 2020 season with a brave drive to third place in the first Steiermark Grand Prix.

The Dutchman held second place behind race winner Lewis Hamilton for much of the race but nursing some front wing damage and on ageing medium tyres he couldn’t keep the second Mercedes of Valtteri Bottas at bay and on lap 67 he was forced back to third as the Finn muscled past on the run to turn four.

Alex Albon also put in a battling drive to keep P4, with the Thai driver coming under heavy pressure from Racing Point’s Sergio Pérez in the closing laps. The Mexican tried to get past but banged wheels with Alex and sustained front wing damage.

Max Verstappen: “Today we maximised the result with the podium and it’s of course good to be back up there, but we were just too slow to really fight for the win. I pushed as hard as I could and tried everything to stay with Lewis but it just wasn’t possible.

“We have work to do and we will keep pushing as hard as we can to improve and I know how hard everyone is working. For me, it wasn’t the most exciting race up until I had a lap of fighting with Valtteri.

“My tyres were pretty dead at that point and I knew he was going to pass me, but I wasn’t going to make it easy and had a bit of fun re-passing him around the outside. I had nothing to lose as there was such a big gap behind so there was no risk.

“P3 is of course good points but it’s still not what we want, we want to fight for victories every weekend, so I hope Hungary is better for us. With less straights, we should hopefully have more chance and maybe it will be hotter than today. For now it’s time for everyone to have a few days to rest and re-set for next week.”

Alex Albon: “The race was ok and P4 is a good amount of points for the Team, especially after last week’s DNF, so we definitely needed that. On my side, I was fighting a bit further back than I would have liked and my race pace wasn’t amazing.

“There’s time to find on my side but we’ve understood the car better this week and I think we know where to improve. With the long straights and types of corner here we struggled a little but I think Max and I both agree on where we can improve the car.

“Towards the end of the race, Perez was very quick. On the last lap he had a decent run on me into Turn 4 but I left him enough space. I think he ran a bit wide and we touched but we avoided a crash so it was ok and just hard racing.

“We’ve got a week now until Hungary to see what we can do, I think Mercedes will be hard to beat as we saw today as they’re really strong, but we’ll keep pushing.”

Christian Horner, Team Principal: “Whilst it’s good to get our first podium of the season, it’s frustrating to not quite have the pace to challenge for the win today. Mercedes were quicker than us and strategically they had more options.

“We covered them with Max on the medium tyre and he was running comfortably in second but he sustained some front wing damage from the kerbs which I don’t think helped his tyre degradation. He pushed Bottas to the end but P3 was the optimum for him today, albeit somewhere ahead of the rest of the field.

“Alex seemed to struggle in the first half of the race despite a couple of good moves on Ocon and Sainz. After the pit stop his pace improved and he fought hard to retain fourth place, keeping a very fast Sergio Perez behind him.

“It has been a huge Team effort from everyone back at the factory who enabled us to bring upgrades this weekend in order to close the gap and we will continue to push on all fronts. It’s great to be racing again and now our focus is on Hungary where we hope to close the gap further.”