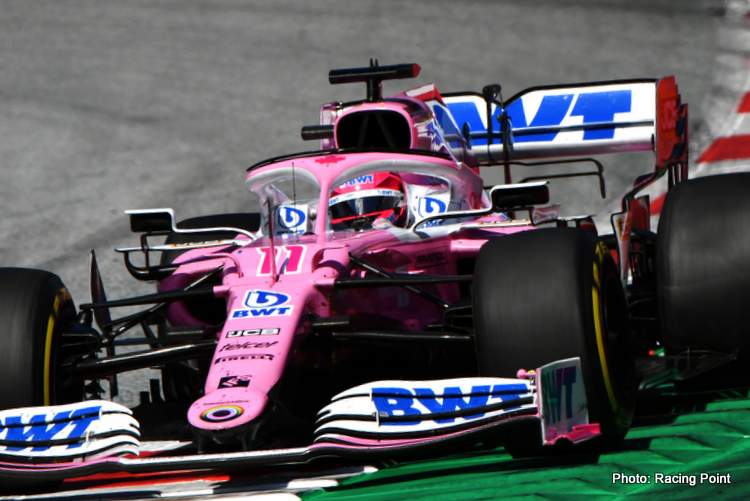 Racing Point had one of their best weekends since the outfit was rescued by Lawrence Stroll, with Sergio Perez fifth and Lance stroll sixth at the Styrian Grand Prix at Red Bull Ring on Sunday.

This is what they had to say at the end of the day in Spielberg:

Sergio Perez: “The team did a fantastic job today: the strategy was good and the car had strong pace. We managed to achieve our goal of recovering positions and managed to drive all the way to P5 ­– almost P4 at the end.

“I was pushing Alex Albon hard through the second stint and I only had the one opportunity to overtake him. Unfortunately, we touched, and I lost a position and finished in P6. The important thing is that we made a good step from last weekend to this weekend at the same circuit.

“Considering the car is a new concept this year, we’ve shown that we are still learning and trying to understand it. I’m excited to go racing in Hungary next weekend.”

Lance Stroll: “We started the race strongly and settled into it quickly, making up some places. We managed to close in on the Renaults ahead too. The second stint was a little trickier and it was very difficult to pass Daniel Ricciardo ­because he was strong on the entry and exit of Turn 1.

“But I was patient and I saw an opportunity to pass him on the final lap and made the move stick. That was such an exciting end to the race and I hope the fans at home enjoyed it as much as we did. The car was competitive today and we performed strongly against our rivals. That’s promising for the coming races.”

Otmar Szafnauer, CEO & Team Principal: “After a difficult Saturday, we recovered well to score some important points this afternoon with both cars. The end of the race was a bit messy, but we gave it everything in those final few laps.

“Both drivers performed well with some strong overtakes to move forward from their starting positions. Sergio enjoyed a great battle with Albon over fourth place, while Lance was fighting with Ricciardo and Norris. It’s a shame there was contact with Albon because the resulting front wing damage dropped Sergio to sixth place at the flag.

“Despite the late drama, we still come away with 14 points and take more encouragement from the car pace as we prepare for next week’s race in Hungary.”